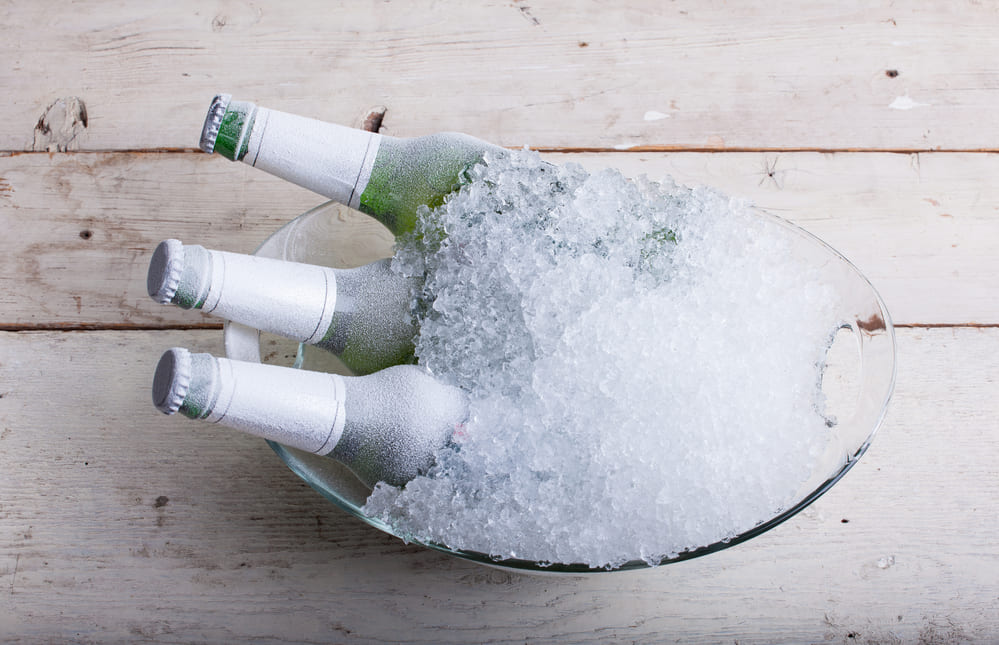 If you like beer, you might wonder how would your favorite alcoholic beverage react in the freezer or a cooler, and would it freeze?

In this guide, you will find all the information you need to know regarding the temperature that beer can freeze at and the conditions for such a reaction to happen.

So, next time you will be able to avoid freezing your beer by accident or cracking the beer bottle due to too low temperature.

You will find that most beers freeze at about 28 degrees Fahrenheit or -2.2 degrees Celsius. But let’s take a loot more into the details regarding freezing beer that you might want to know about!

You will find out that beers with different ABV also freeze at different points and there are ways to save your beer even after it froze!

More: Can You Freeze Whiskey?

The general rule says that the lower the ABV in your beer is, the higher the freezing point will be. Naturally, beers that contain more alcohol will freeze harder than beers than contain the average 5% ABV.

The short answer is yes, beer can freeze. However, the ethanol component of its alcohol will not freeze. Beer is made out of mostly water which will freeze and turn into icy crystals. So, even if the ethanol will not freeze, your bottles of beer will have ice inside of them.

As you see in the table above, beer freezes at different temperatures, according to its alcoholic content.

How long does it take beer to freeze at 20 degrees?

Your beer will reach the temperature of 20 degrees F in around 5 hours, but that doesn’t mean it will take 5 hours to freeze. Depending on the alcohol content of your beer, it might get frozen in an hour.

If you place your beer directly in a freezer that has a temperature of 20 degrees F, it will freeze between 30 minutes and one hour. The freezing time will also be influenced by the material of the beer container which can be glass if you store your beer in a bottle or can. 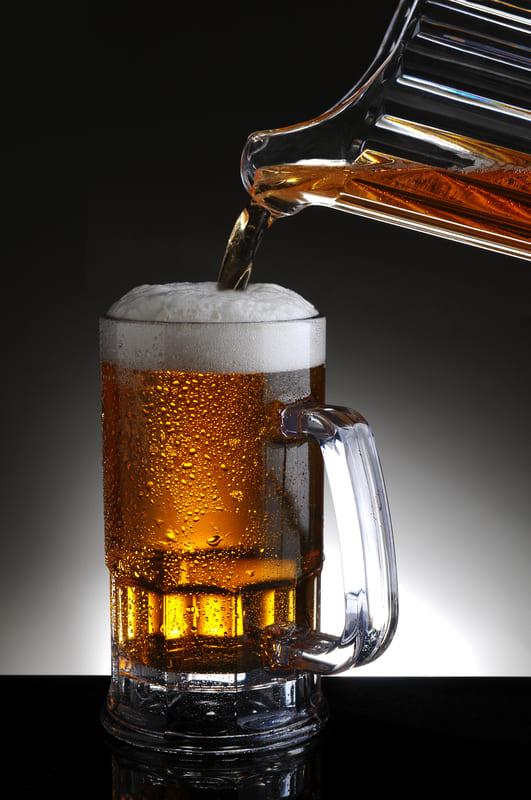 Despite what many consumers think, frozen beer doesn’t mean ruined beer. There are ways to recover a frozen beer and there are several methods for it.

Thawing your frozen beer is the most natural method that most people think about. To do that you will remove the bottles of beer from the freezer and place them in the sink. Let cold water run over them until the ice crystals inside the bottles start melting.

It is important not to transfer your beer from freezing temperature too warm or hot temperature, which is why the cold sink water eases the transition.

Once your bottle is cool enough to see the ice melting, you can speed up the process by placing the containers in the microwave.

Be careful though if you do that because you need to make sure the containers are microwave safe and you only use the lowest microwave temperature.

You can also defrost your beer in the fridge, although this method will take about 12 to 14 hours.

You have most likely heard of the process of decantation and while this will modify your beer a bit, it is still a great method if you want to save your frozen alcoholic beverage.

Decantation separates the frost from the liquid alcoholic content of your beer. If you do this method you will end up with a more concentrated drink but the taste will still be one of the beers you love.

You can do the decantation of your frozen beer at home, by using a sieve and you will be impressed by how strong the liquid you obtain is since it will be more concentrated alcohol.

The decantation method shouldn’t be your first choice though unless you are curious about how it will turn out.

The decanted beer will taste different than the beer you initially put in the freezer and you will have to consume it differently as well since it is richer in alcohol.

But this method can still help you get an alcoholic beverage out of your drink by using the decantation method. 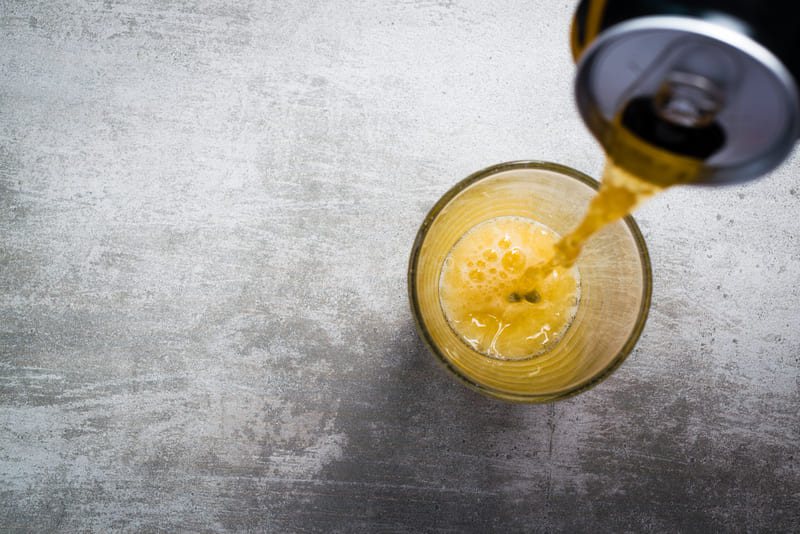 Use your frozen beer in a Margarita

A quite interesting way to use frozen beer is in a Margarita. You can add it to your Margarita mix and your drink will become a Margarita beer.

Some people even prefer their Margarita with a beer in it as it gives it a particular taste. Plus, Margarita contains tequila, which pairs well with beers of all kinds.

It is important though, to not add beer that is too strong in its alcohol content as Margarita already contains tequila.

And if you want to get creative, you can also add frozen beer to other cocktails such as the classic Mexican cocktail Chelada which already contains Mexican beer.

Despite traditional beliefs, beer can be a fairly versatile drink that you will for sure be able to use in the kitchen so get creative with it and most likely you will not regret it.

Use it in your dishes

It might surprise you to find out that beer goes great in different dishes too so you can use it as an ingredient when you are cooking, even if it is frozen.

The taste of beer goes great with a lot of savory foods from sauces to steaks and even baked dishes. In general, beer adds the earthly and rich taste to stews and soups as well and it can be your little secret in the kitchen.

How long does it take for a can of beer to freeze?

The general rule says that beer will freeze completely in about one hour at a temperature of 25 degrees F. Beer in cans usually freezes at about the same time as beer in bottles.

But keep in mind that cans are safer since they will not crack when they are frozen, as the glass might. This is why it is recommended to store your beer in cans rather than glass bottles.

How do you calculate the freezing point of alcohol?

The freezing point of an alcoholic beverage will depend directly on the ABV of that particular drink.

Alcoholic beverages with low alcoholic points will freeze faster and at higher temperatures compared to beverages that have a high ABV.

Beer in particular but wine as well, are among the alcoholic beverages that shouldn’t be frozen as they have a low ABV. You can still place your can or bottle of beer in the freezer for 10 to 15 minutes if you want to cool it down faster but beware that beyond this time, your drink can enter the frozen state.

There are a few main aspects that will influence the way your beer freezes, or not. So, make sure you read the tag of your beer so you know what it contains before trying to estimate its freezing point!

The alcohol content of your beer will have a significant impact on its freezing point. With pure ethanol having such a high freezing point as -173 degrees F, if your beer contains more alcohol, it will freeze slower and at a higher temperature. On the other hand, water can condense at 32 degrees F.

So, the more water your beer contains, the more ice flakes you will find in it once it reaches a freezing point.

The alcohol content is important to any other alcoholic beverage when it comes to the freezing point and there are drinks such as vodka that can be stored in the freezer without taking the risk of getting it frozen, thanks to its high alcohol content.

The sugar content also has a relevant impact on the freezing point of your beer because sugar is a preservative.

One of the main properties of sugar in this context is that it prevents water from condensing which as result lowers the freezing point of the alcoholic drink.

So, check the sugar content of your beer and know that the higher this content is, the more difficult your beer will freeze.

Material and size of the container

Beer freezes fairly at the same time and the temperature it needs to freeze also stays constant regardless of its container.

However, the kegerator keeps the beer cooler and if you put your beer in the freezer in such a container, chances are that it will freeze a bit faster.

The difference between a can of beer and a bottle of beer is unnoticeable in terms of what container freezes the beer faster.

Can beer freeze in a cooler?

Many people bring their beers in a cooler when they go to a picnic, the seaside, or even a party. But will your beer freeze in a cooler? The answer is that it will depend on the cooler and whether or not you add ice to it.

Dry Ice keeps a temperature of -109.3 degrees F, which is about -78.5 degrees C. All the containers that you have in your cooler that get in touch with the dry ice will freeze as well.

The time in which beer can get frozen in a cooler and the time it stays in such a state varies according to the type of cooler and the climate conditions you keep it in.

But it is safe to say that keeping beer in your cooler will assure you a cool beverage any time you spend your time out with your friends.

Will a cooler keep the beer from freezing?

A cooler will not keep the beer from freezing necessarily but it will slow down the process. You can skip the dry ice if you just want your beer to stay cold and not get frozen while you store it in your cooler.

Or, if you want to add dry ice to your cooler, make sure it doesn’t get in direct contact with your beer containers. By doing so, you will also avoid the freezing aspect but you will still keep your beer at cool temperatures.

While frozen beer is not something people desire, this guide will help you see that it is not a tragedy either. You can still make the most out of your beer even if it is in a frozen state.

Should you choose to defrost it or use it frozen in Margarita or other drinks and dishes, you can still find a use for your frozen beverage.

However, it is always best to prevent beer from getting frozen so you can enjoy it at the cool temperature you prefer, without having to worry about ice flakes inside your drink!