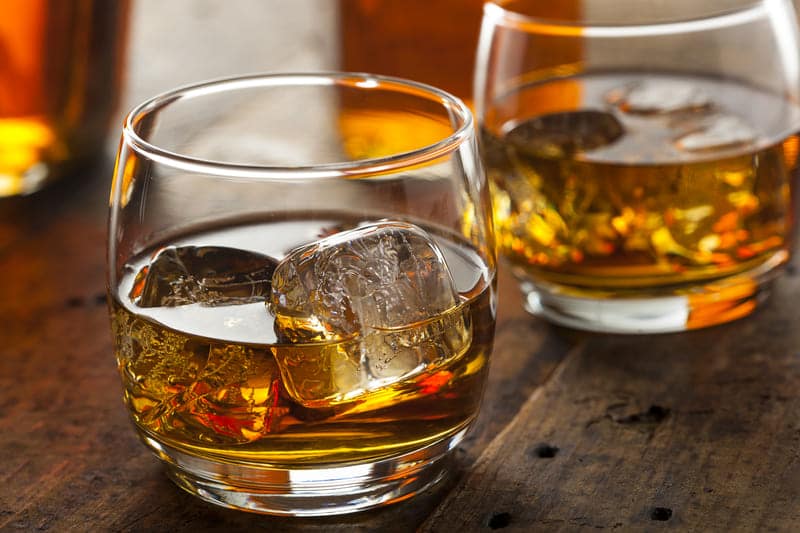 Bourbon, whiskey and scotch are some of the most consumed alcoholic beverages worldwide. You can drink each of these plain or use them as an important ingredient in different cocktails. But in spite of the resemblances between these three drinks, there are also notable differences you should be aware of when you choose one over another.

The main difference between these three types of drinks is that they are made of different grains. This will affect their taste along with other characteristics.

How are bourbon, whiskey and scotch made?

All these three drinks are essentially whiskey, which is a distilled alcoholic beverage. Whiskey can be made of different grain mash that is fermented and it is let to age in wooden casks.

Bourbon whiskey is made by using corn mash as the main type of grain. This type of whiskey is specific to the United States. According to the original recipe, bourbon has to be made of at least 51% corn mash and it has to be aged in barrels that are new.

Scotch whiskey is made mainly of malted barley and it is a type of whiskey that is specific to Scotland. Scotch can be a single malt or single grain, depending on the recipe that was followed. The aging limit for scotch is three years.

Regular whiskey tends to be consumed after it was aged for three years. This includes malt whiskey and grain whiskey. But it is not uncommon to find bottles of whiskey that were aged for ten years and even more than that.

Alcohol levels in bourbon, scotch and other types of whiskey

While the alcohol levels of whiskey can vary, the average stays the same for alol kinds, including scotch and bourbon. Most types of whiskey come at an alocohol level of 40 %.

For scotch, 40% ABV is a minimum level to which the drink is bottled. But you can find scotch even with 60% alcohol content. Similarily, bourbon comes at an alcohol level of minimum 40%, meaning that you can find these drinks with a higher alcoholic concentration on the market.

The alcohol by volume in a bottle of whiskey, being it bourbon, scotch or other types of whiskey is specified on the wrapping. So, you will not have to guess this aspect at all.

Even if both bourbon and scotch are types of whiskey, they come with different flavor profile. So, you might easily prefer one over the other.

Bourbon has a more caramelized taste with vanilla flavor, and oak notes as well as a rye spice.

Scotch on the other hand, can have a more woody taste and even a buttery, soft flavor to it. Most types of scotch also have a smoky flavor to them too.

Grain whiskey in general, tends to have a defined flavor that comes from the grains used. Different brands of whiskey will have different notes of caramel, oak and smoky notes as well.

Is Scotch whiskey better than bourbon?

Scotch and bourbon are both equally popular and choosing the best one is definitely a matter of personal preferences. If you prefer sweeter drinks, bourbon will be a better choice for you but if you like the soft, buttery taste, then scotch is the winner you will go for.

Consider that scotch tends to be more popular in Europe and more easily accessible since it is produced in Scotland. At the same time, bourbon, being specific to United States might come at a higher price and might not be as easy to find in other parts of the world.

So, the type of whiskey you choose will also be based on the type you can find in your area. Also, if you want to use your whiskey an ingredient in more complex cocktails, you will be guided by the recipe as in what kind of whiskey to go for.

What is the main difference between Scotch and bourbon?

The main ingredient in both bourbon and scotch is also the main difference between these two types of whiskey. Bourbon is made of minim um 51% corn and scotch is traditionally made from malted barley but it can be made with other types of malted grains. While you will find different recipes and tries to replicate both of these drinks, the original ones are always the best to go for.

You will notice as soon as you have a sip of these two whiskey drinks that bourbon is significantly sweeter than scotch. Bourbon can be defined by a caramel flavor while scotch brings an intense smoky flavor.

Is Jack Daniels whiskey or bourbon?

Many people are aware of the fact that Jack Daniel’s is a whiskey drink. But there is a debate regarding if it is a bourbon type of whiskey or not. This whiskey type comes from Tennessee but while all bourbon is whiskey, not all whiskey is bourbon.

Jack Daniel’s contains at least 51% corn, which falls under the bourbon category and it is only made in the United States as far as its original recipe goes. Also, this Tennessee whiskey is aged in virgin barrelos, just as bourbon should be aged.

According to the features above, Jack Daniel’s can easily be considered a type of bourbon. But the discussion is not yet over and the verdict can still be debatable due to a few aspects.

Tennessee whiskey is required to go through a charcoal filtration before it is put to barrels. However, there is no such a rule that applies to bourbon production.

Another important aspect is that the companies that produce Jack Daniel’s are not openly and officially calling their whiskey a bourbon. The reasons behind that could be many but we should note that they are not denying it is bourbon either. It could be a matter of brand conservation as the producers want Jack Daniel’s to stasnd by itself and have its own personality rather than fall into the wide category of bourbons.

However, most consumers tend to use bourbon and Jack Daniel’s whiskey interchangeably thanks to their many similarities. Basically, the differences between these two types of drinks are so small that they don’t seem to count.

Bourbon is used in drinks as well as in sauces and it can definitely be a great ingredients in marinates, as well as cookies, pies and even cakes. This wide usage of bourbon comes from its sweet, caramelized flavor that is suitable for many types of dishes.

When it comes to cocktails, bourbon is an ingredient in many popular drinks such as Boulevardier Cocktail, New York Sour or Kentucky mule. Bourbon Sidecar is another popular drink that includes bourbon. Take into account that bourbon will bring a level of sweetness to your drink as well as a significant amount of alcohol.

Scotch can also be used in the kitchen and in different sauces but it is an ingredient primarily in savory foods rather than sweets. Its flavor is less sweet compared to bourbon, which makes it less suitable for dishes like desserts.

The famous Blood and sand cocktail contains scotch as well as the Godfather cocktail and the iconic Scotch sour. Scotch can really enhance the taste of a cocktail and help you get a more intense experience at the same time.

Ultimately, both bourbon and scotch are popular types of whiskey that you can enjoy in your drinks as well as in your kitchen or plain. You might not be able to find these types of whiskey at all local stores but chances are that if you can’t find one, you can find another.

Taste both bourbon and scotch plain before using them in different combination in order to decide which one you like most. You will be able to decide on the quantities you want to use them in as well as long as you are aware of the flavor they bring.