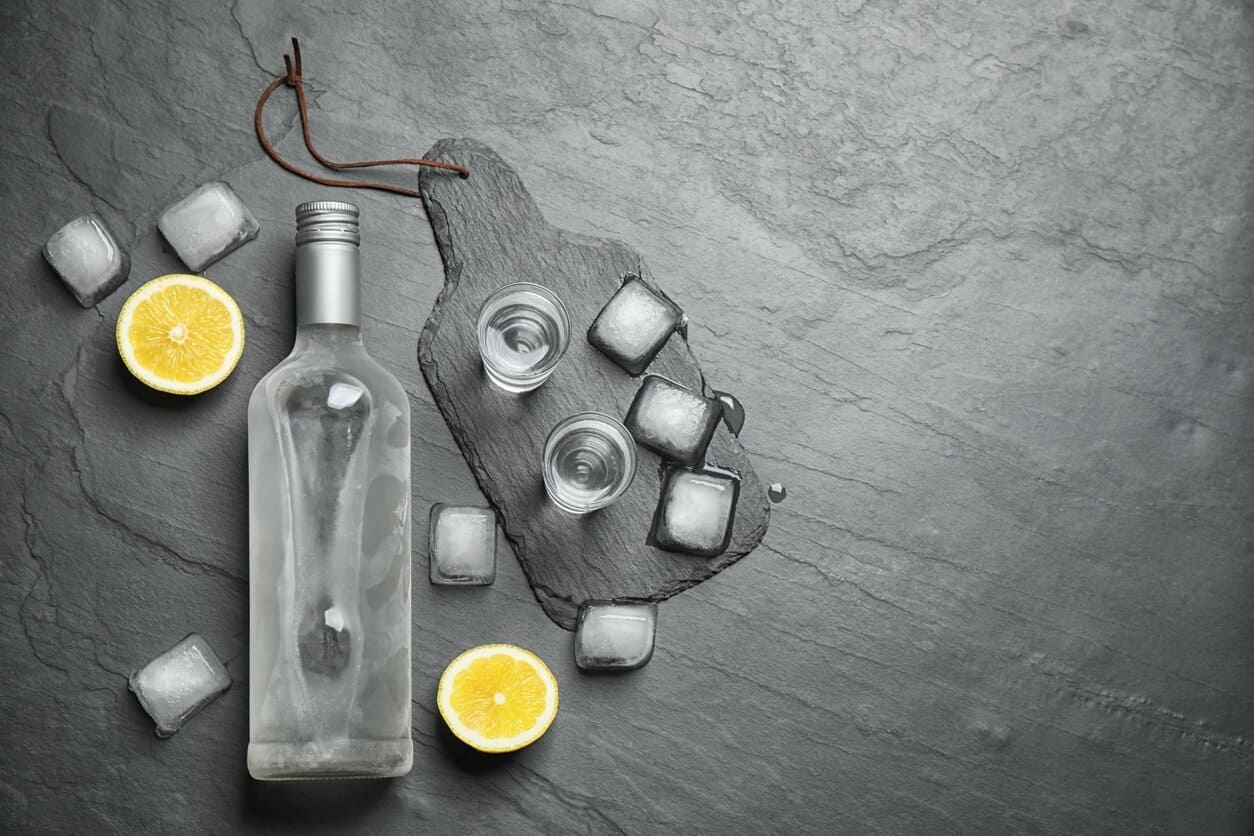 Costco has successfully made a name as the world’s third-largest retailer. It also has its proprietary product brand bearing the “Kirkland Signature” label as a way of honoring the base of the company, which is in Kirkland.

Its alcohol assortment encompasses many types of alcohol, such as wine, beer, brandy, whiskey, vodka, and tequila, carrying a number of brands and types of each alcohol.

Many of the alcoholic beverages carry the “Kirkland Signature” label, meaning that they are products under Costco’s proprietary brand. However, Costco doesn’t own a distillery, and therefore it is logical to assume that they distill the spirits elsewhere.

Costco has always been sort of secretive about where they get their signature products and who distills their spirits. There are all sorts of rumors about who distills their whiskeys, of which they have ten kinds, and the same rumors are at play about the vodkas.

So, who makes Kirkland vodka?

Both Kirkland Signature vodkas are of excellent quality; however, the American and French kinds are pretty different.

The American kind is sharper and has the recognizable vodka alcoholic bite with a burn that lingers in your throat and chest for a while. It is aggressive, and some even call it offensive vodka, as it feels like it is offending you with its sharpness.

The Kirkland French vodka is a different story. Described as gentle and smooth, it has a certain elegance and refinement about it you don’t get from the American kind.

While the American kind is good for shots so that everything passes quickly, the French kind is more preferable for slow sipping.

If you increase the other cocktail amounts, it will subdue the American vodka aggressiveness.

In the following article, I will explain how Kirkland Signature vodka is made, both the American and French kinds, and what to expect from both of them.

However, the available information regarding the details on how and where Kirkland vodka is made are not abundant, as Costco is known to keep a tight circle in which it shares such information.

Although they bear the same label, “Kirkland Signature,” the American and French Kirkland vodkas are not made the same way. They are both made of grains and spring water.

While the Kirkland American vodka is made from grains and spring water from the Midwest of North America, the French kind is made from the same ingredients but from France.

Costco doesn’t reveal from where precisely the grains are for the American vodka, but they probably come anywhere from Illinois and Kansas to Missouri and North Dakota. The water comes from these regions as well.

Due to its similarity to the Grey Goose vodka, it is presumed that the grains and spring water for the Kirkland Signature French vodka come from the Cognac region in France.

The Kirkland American vodka is presumed to be made of corn due to economic reasons, as corn is very cheap and abundant. Whether or not there is another grain involved remains unclear, as Costco never stated the exact grains included in the making process.

The exact grains used for Kirkland French vodka are also unknown, but considering that winter wheat dominates the French lands, it is safe to assume that that is the type of grain used for its production.

The one thing definite and clear about the Kirkland Signature American and French vodka is the lack of chemical additives and sugars. Therefore, despite the uncertain origins of these vodkas’ ingredients, there is no doubt about their quality and purity.

Even though they are made of grains, both Kirkland vodkas are grain-free, making them keto-friendly. They are distilled five times and filtrated twice before bottling, so none of their base elements remain in the final product.

The Kirkland vodkas are also gluten-free, even though they are made of grains, due to the rigorous distillation and filtration processes. They are also considered vegan and certified kosher.

The registered vodka supplier for Costco is LeVecke Corp.

There are considerable taste differences between the American and French Kirkland vodkas. While the Kirkland American vodka is plain vodka and exceptionally harsh, the Kirkland French vodka is very smooth and gentle.

Now, when it comes to vodka, there is no stingless vodka, as that is its main feature, but the Kirkland French vodka tones down the sting with its viscosity.

It has a significantly higher viscosity compared to the Kirkland American vodka, which plays a very big role in the ease of drinking.

On the other hand, the Kirkland American vodka is best described as watery, with a very low to no viscosity. Therefore it burns and stings exceptionally aggressively. It has a burn that stays with you pretty long, and I’d recommend you chase it with something thicker.

Both Kirkland vodkas have their own fans, as they are very different and don’t appeal to the same audience. Still, I would say that Kirkland French vodka has a bit wider auditorium.

It seems that those who like its refinement and gentility are a little more numerous than those who love the sharp sting of the Kirkland American vodka. 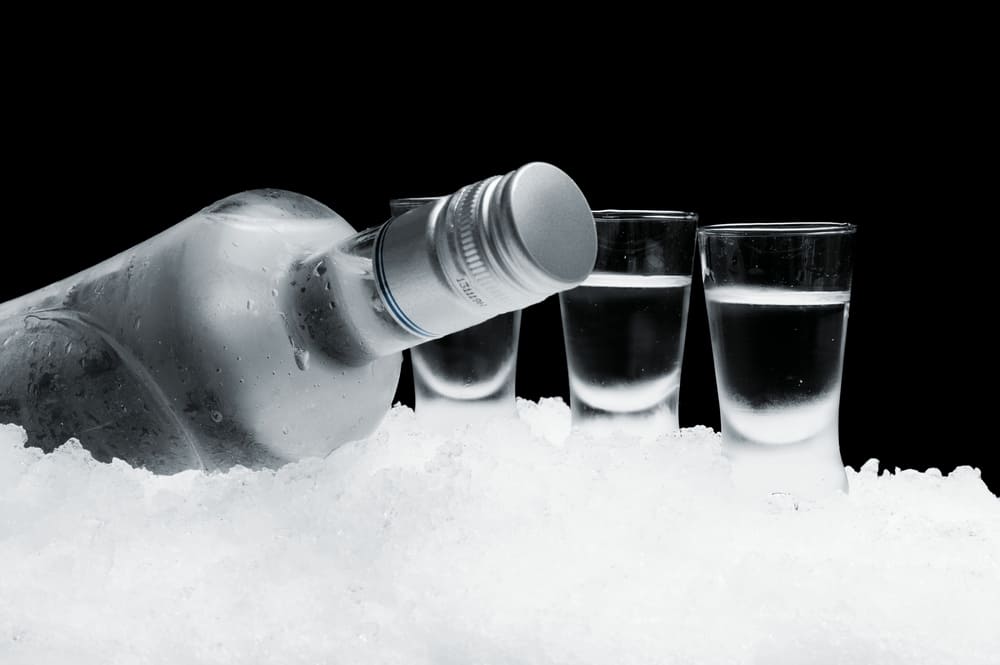 In terms of price, both Kirkland vodkas give excellent value for the money, as that is the Costco general policy, especially regarding the Kirkland Signature products.

Kirkland French vodka is a spirit under the Costco Wholesale Corporation, which doesn’t have its own distillery, and its spirits are distilled under private labels. The Kirkland vodka is distilled by the LeVecke Corp. The Grey Goose is a vodka Distilled by the Bacardi Group.

In addition to the price and distilling company, these two vodkas also differ in one more very significant aspect, their tastes. Even though it isn’t a luxury vodka, the Kirkland French vodka is superior to Grey Goose as being higher in viscosity and texture.

Both vodkas are very smooth and easy to drink. Both are very gentle to the palate and layer the throat so that each next sip is smoother with a lesser burn.

However, Grey Goose is a tad more flavorful and more aromatic than Kirkland French. This is not to say that Kirkland French lacks flavor and aroma, but its main quality is its smoothness.

The one aspect in which Kirkland French and Grey Goose are most similar is the appearance. They are both colorless and crystal clear, and you should be a highly seasoned vodka enthusiast to recognize which is which outside of the bottle.

More: 17 Best Vodka Made In Russia

Who Makes the Vodka for Kirkland?

The registered vodka supplier for Costco and the Kirkland vodka brand is LeVecke Corp. Located in California; they are a very successful distillery operating on all continents through many renowned alcohol brands.

They make whiskey, vodka, wine, etc., and are one of the few distilleries that Costco has revealed as their supplier.

What Is Kirkland Vodka Comparable To?

It is watery, aggressive, and more than a bit edgy. Many compare it to Tito’s vodka, with Tito’s vodka being the smoother of the two.

Kirkland American vodka is also often compared to Absolut vodka because they are both sharp with an intense burn, but Absolut is the more aromatic of the two.

Kirkland French vodka is famously comparable to Grey Goose. There have been many speculations that these two are actually the same spirit, only differently packed. Even though they are not the same spirit, they are very similar.

What tricks you into mistaking one for the other is the smoothness. Both Kirkland French and Grey Goose are velvety smooth and very gentle. However, while Kirkland French is higher in viscosity, Grey Goose is so smooth that it is almost creamy.

Their appearances are nearly the same, with the Grey Goose being a tad more flavorful and aromatic than Kirkland French vodka.

They are also made by different distillers, bear different labels, and have different prices.

What Is Kirkland Vodka Made from?

However, Costco is absolutely silent about any more details on the ingredients used to produce the Kirkland vodkas, so the details on that are still foggy.

Both vodkas are distilled five times and filtrated twice, so they are grain-free, gluten-free, and contain no additives and sugars. They are also keto-friendly, vegan-confirmed, and kosher-certified.

Kirkland vodka is excellent vodka. Its quality is above average; it is pure, with no additives and sugars made from purified spring water and grains.

Taste-wise, the Kirkland American is sharp, aggressive, and pretty nasty. It is watery, and it leaves a pretty intense and lingering burn. However, it is considered as a worthy competitor in its category.

The Kirkland French is a refined and elegant spirit, smooth and gentle, with high viscosity, and significantly less aggressive. It is an excellent vodka, ranked high among in its group.

Is Kirkland Vodka Made from Potatoes?

Kirkland vodka is not made of potatoes. It is made of grains, whereby Kirkland American is presumed to be made of corn and Kirkland French of winter wheat.

The Kirkland American uses corn from the Midwest of the United States, and Kirkland French uses winter wheat from France.