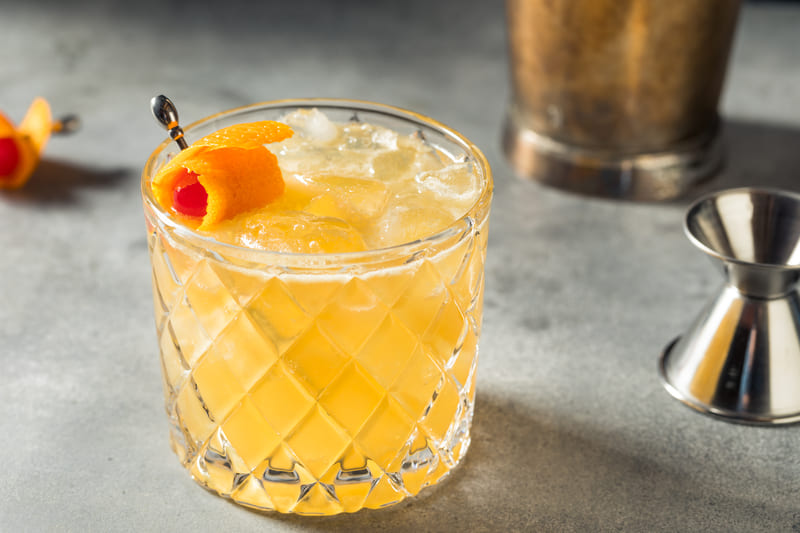 Jack Daniels is one of the most used brands of Tenessee Whiskey. There are a variety of flavors of Jack Daniels to pick from.

To name a few, there is the flavor Tenessee Apple, Gentlemen Jack, Tennessee Fire, Single Barrel, Old No. 7, Tenessee Rye, and the taste of the article…. Drumroll, please… Tennessee Honey!

Jack Daniel’s Honey is 100% the flavor you would want to get if Tenessee Apple isn’t sweet enough. It is definitely a very sweet whiskey, that is smooth going down, with hints of sweet honey. It is the sweetest whiskey because it is Tennessee Whiskey mixed with honey liquor.

There are also so many ways to mix it with other things to create different drinks and flavors! Just like everything else that you make food and drink wise, there is a measuring system for mixing alcoholic drinks.

These are usually called ratios. Ratios will be talked about in this article, along with how to mix and make the drink and any questions that need to be answered. I would stick around if you love Jack Daniel’s or might even consider trying it!

12 Ways To Mix Jack Daniels Honey And Their Ratios

As everything in the food and beverage world goes, there are a million different ways to mix and enjoy Jack Daniel’s Honey Whiskey. This section will be covering 12 different ways you can do exactly that:

This mixed drink is made with Jack Daniel’s Honey Whiskey with Dr. Pepper. It creates a smooth honey-like taste with hints of spice and the sweetness of the soda. You want to make the ratio 2:1 for the perfect mix of these two!

This cranberry drink could be an amazing Christmas drink with some cranberries and a cinnamon stick as garnish!

This would be an amazing choice of drink when you are relaxing on the porch in late spring as it is just becoming warmer again. This drink ratio is 2 parts honey whiskey with 4 parts lemonade. Pour this over some ice and add a lemon or lime slice and voila! Perfect late spring drink.

If you like more flowery-tasting alcohol, the lavender julep is the perfect one to try! The julep is in fact one of the most commonly known cocktails. It is referred to as a “smash”, but it for sure is an elegant way to drink Tennessee Whiskey.

This type of drink would definitely be one to drink while reading or sitting in the garden. It sounds so natural but still able to get you tipsy. The ratio for this type of drink is one part lavender syrup with two parts jack Daniel’s Honey. This drink requires a syrup though.

Football season is upon us once again in the United States. Many like to drink while watching their teams, celebrate their team’s wins, or grieve losses.

That makes this specific Jack Daniels recipe an amazing choice to make for your football parties or small gatherings. This drink is made up of 6 parts jack honey, 3 parts orange juice, and 1 part cranberry juice. You can mix orange slices in it or use them as garnish.

We have covered a lemonade cocktail with jack honey in it, so now let’s try a limeade drink. For this one, we need 1 part jack honey, 2 part lime juice, and a splash of ginger ale. You can also use some kind of garnish if you wanted to. The main ones used in this specific recipe are limes and mint.

This is another mixed drink recipe for football season. This one, however, is a peach tea. This could be for those who can’t handle too much alcohol at once or just like an easy-going kind of drink. Either way, this should make an appearance at some point.

This is made with 1 part jack honey, 2 parts peach tea, and mixed with peach slices!

8. Land Of Milk And Honey

This kind of alcoholic mixed drink is the perfect one to enjoy by the fire on a cold winter evening. This is an amazing way to also help you sleep that night as well. The ratio is 4 parts of slightly warmed milk to 1 part of the Jack Daniels Honey.

There is another exciting thing happening soon, which is my all-time favorite time of the year. Spooky season! This is when Halloween is, and this mixed drink is the best one to have during the spooky season that includes Jack Honey Whiskey in it. You want to mix 1.5 parts jack honey with 6-8 parts ginger beer and lime for the garnish.

If you are a person who enjoys some spiciness in their drinks, or even their life, this is for sure one you should try. This recipe deals with Jack Daniels as the brand for both alcohol bottles in this, although I’m sure if you enjoy fireball better, you could sub that in. One part of jack honey and part of the Tennessee Fire makes this hot and ready drink!

There aren’t enough fruity mixed drinks on this list, considering the main alcohol is a honey-based one. This drink is made of two parts jack honey, 4 parts grapefruit juice, and 1.5 parts of honey syrup. Grapefruit slices or lemon slices can be used as a garnish to top off this sour but fruity and smooth drink.

This recipe is a very quick and very easy one. This will make shots and it is the perfect size for a quick one during the day or multiple in a row on a night out or a party.

Read: What Do You Mix With Bourbon?

What Goes Well With Honey Whiskey?

This question is answered in itself but it is still a great one. You can mix this jack honey with basically anything. You can also mix flavors together and experiment with different tastes.

If you like spicy, in your food or your drink, then something spicy like fireball or a dash of something else spicy. There are some recipes you can find with spice, there is even one in the above list! You can also mix Jack Honey with milk, coffee, other alcohol, etc.

If you can’t find one with Jack Honey you like, you can always mix and match and see what tastes the best to you! If nothing then maybe it’s the jack honey that you don’t enjoy. There is other Jack Daniel alcohol you can try instead.

Can You Mix Jack Daniels Honey With Sprite?

You can use many different sodas with Jack Honey. Coke, Pepsi, Dr. Pepper, and root beer will all work, but it isn’t limited to just these. Dr. Pepper is the most popular flavor of soda to use with Jack Honey. However you can use the soda of your choice, this includes sprite as well.

There are some very good tasting cocktails that use sprite with Jack Honey. You can use just sprite and Jack Hiney if you would like.

Usually, the ratio for a drink like this is 3 parts sprite 1 part Jack Honey, but that is also very dependent on your tastebuds and what you enjoy drinking.

What Is The Best Mixer For Jack Daniels?

Throughout this article, we have learned that mixing Jack Daniel’s Honey is the best way to enjoy it. There are so many amazing mixers, however, there are some that just work better than most.

The number 1 spot goes to Dr. Pepper of course! This is the absolute best way to drink this type of alcohol. It gives the perfect amount of bubbly with the right amount of honey smooth Tennessee Whiskey.

The second best thing to mix with this is milk surprisingly. This is the best way to slow down or settle for the night. Slightly warmed milk is known to help induce sleep inside the human body by making the natural hormone called melatonin. Mixing this with some Jack Honey makes the perfect bedside drink.

Related: What to Mix with Cognac?

How Do You Serve Jack Daniels Honey?

You usually serve any kind of mixed drink or anything alcoholic that is not something fancy like shots, poured over ice. It is always the proper way to serve mixed drinks, especially in a bar or crowded area.

You can serve Jack Honey in shots as well. With shots, however, you don’t serve over ice. Usually, you only pour the whiskey straight into a shot glass with maybe a tiny garnish on top, but that doesn’t happen often.

There is another way to serve Jack Daniel’s Honey. That is through a cocktail. Cocktails might be the most popular way to serve Jack Honey. These are usually mixed with lemonade in these cocktails, however, cranberry juice is also an amazing choice.

Can You Use Jack Daniels Honey In Food?

Not only can you use Jack Daniel’s Honey in your food, but you can also go to the grocery store and buy meat that is already infused with Jack Daniel’s Honey. They are certified to infuse meat like beef, pork, poultry, as well as whatever may be considered barbecue meat.

There is something called cooking wine, which is a small amount of alcohol, just to cook for taste. Some say that they enjoy using whiskeys as cooking alcohol than many wines and spirits that are made for that.

Doing this gives your food so much more depth and makes it extremely more flavorful too. You can also use this flavorful whiskey in place of bourbon if you would rather. Doing this doesn’t affect the taste or flavor, even though bourbon has to be made in a very specific way.

Whiskey is considered the second best alcohol to cook with, just below white and red wine/sherries. White wine is versatile alcohol to use, however, whiskey gives more taste and flavor for sure.

The Jack Daniel’s brand is a pretty expensive one, considering they are an extremely well-used company. Not everyone can spend that kind of money on a bottle of this stuff, so the research was done, and I have compiled an entire list of alternative alcohols you can use and the description.

The first alternative, and the most recommended one in place of Jack Honey, is called Wild Turkey Honey Whiskey. This is a bourbon whiskey, however, but it will still work the same. This is a sweeter side of the Kentucky bourbon, and extremely smooth.

The next alternative I found is called Evan Williams Bourbon. This whiskey has a sweet taste of real, natural honey. The color is a pale gold/yellow color, kind of just like real honey is.

It smells strongly of whiskey of course, but the hints of citrus and honey help. It tastes like honey with little notes of vanilla throughout the entire drink, making this the perfect drink to substitute for Jack Honey. A bottle of this costs around $13, so very affordable!