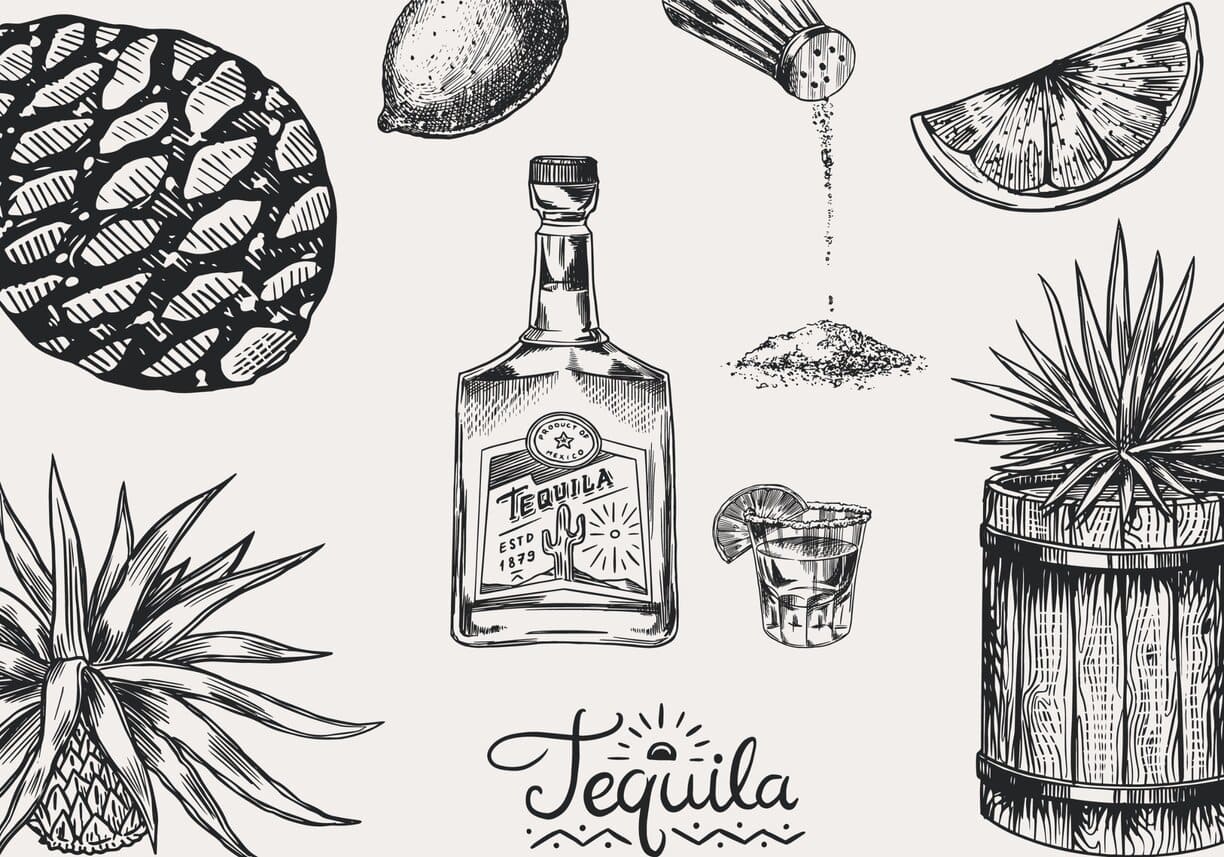 Tequila is a world-famous spirit that has been origin protected, meaning that it cannot be produced anywhere else except in Mexico. This fiery alcoholic drink is made by distilling the agave plant which grows around the city of Tequila.

While the rest of the world has tequila with salt and lemon, in Mexico, tequila is served neat in the form of a shot. We often hear about the worm in the tequila bottle, but that is a misconception, as the worm isn’t actually a worm but a larva, and tequila is tequila with or without it.

There are different stories about the tequila worm making the tequila taste differently or giving you visions if you eat it, but that is nothing but a marketing rumor. The larva in the tequila is naturally found in the agave plant, and sometimes it grows in the tequila bottle. Moreover, the worms and scorpions are a part of the mescal drink, not tequila.

Another misconception about tequila is that it is the same as mescal. Even though both mescal and tequila come from the agave plant, tequila requires a specific type of agave- blue agave, while mescal can be produced by distilling other types of agave plants.

Tequila is divided into two categories according to the percentage of blue agave- mixtos (mixed) and 100% blue agave. In terms of aging, there are four main types of tequila- Blanco, Reposado, Añejo, and Extra Añejo. 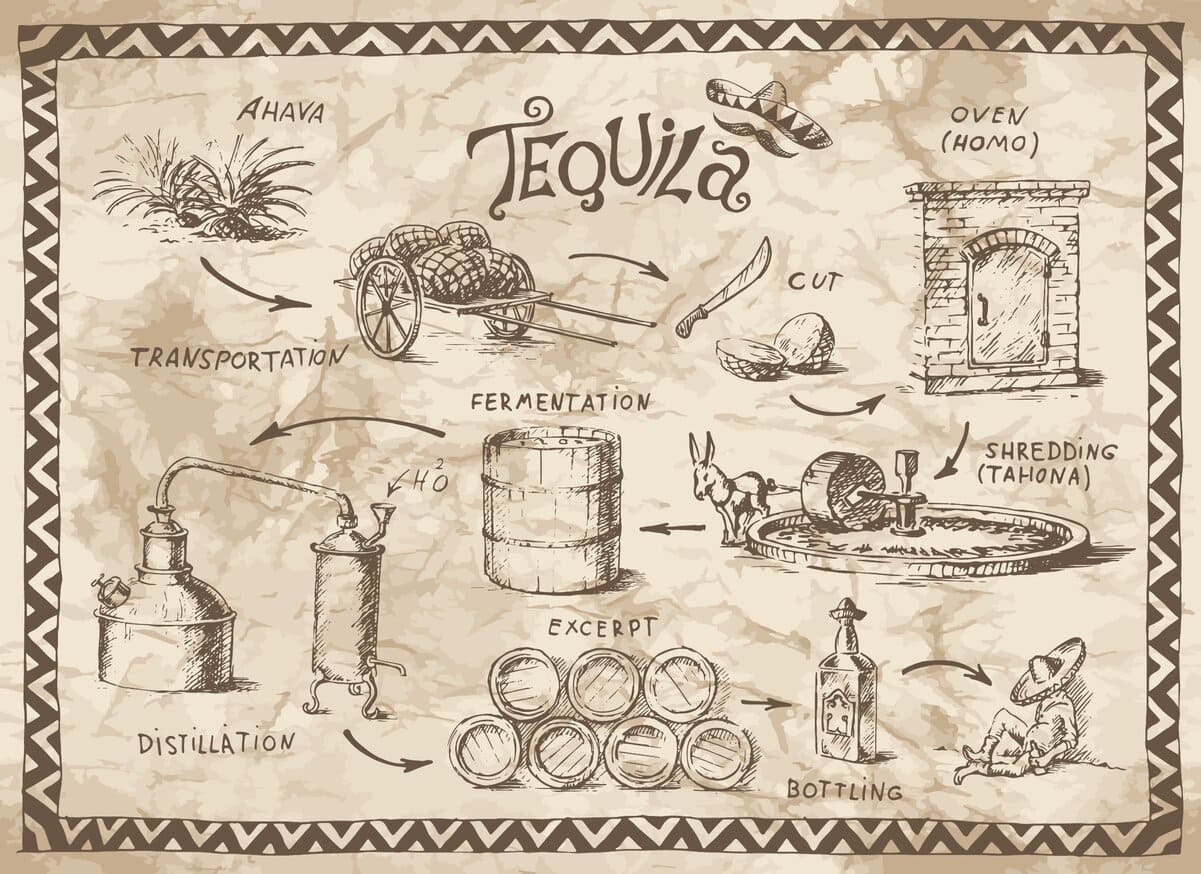 Types of Tequila According to the Blue Agave Percentage

Depending on the blue agave percentage, there are two types of tequila, mixtos and 100% blue agave tequila. They both have their specific characteristics as well as their audience, though the tequila mixto is regarded as the one with poorer quality.

Tequila mixto is made of 51% of blue agave sugars and 49% of whatever other sugars are available to the manufacturer. The other sugars added to this tequila are mostly fructose and glucose obtained from cane or high fructose corn syrup.

In addition, the tequila mixto often contains artificial flavorings and colorings, thickeners, and other additives to make it resemble premium tequila even though it is not.

The tequila-lovers and those who are keen on exploring the aspects of this drink will say that the mixtos are the ugly stepchildren of tequila, as this type of tequila barely passes the tequila qualification limit, with the bare minimum of 51% of blue agave sugars.

Until 1949, the criterion for tequila was 100% blue agave, then, in 1965, this percentage became 70%, and in 1970, it dropped to 51%, and it has remained like that to this day. The reason why tequila mixto came into existence is the cheaper manufacturing and the wide availability on the market.

The tequilas mixtos are largely sold worldwide as they are cheaper than the 100% premium tequila, and those who haven’t had premium will never know the difference, so it seems like a reasonable business move. Of course, on the tequila mixto quality spectrum, you can find some pretty decent tequilas and some very bad ones.

Moreover, the tequila mixto is not labeled as “mixto” as the legal requirements do not impose such a rule, as long as the mixtos are not mislabeled as “100%”. Therefore, the customer not seeing “mixtos” on the label influences them to see this type of tequila as a 100% blue agave.

The 100% agave sugar tequila is also referred to as “premium” as it is made from 100% blue agave. This type of tequila is considered to be far better than the tequila mixto as it is entirely pure and free of other additives.

Moreover, tequila has been known as “a headache in a bottle,” and unrightfully so, as that is the tequila mixto due to the different ingredients it combines, many of which are artificial, such as flavorings and colorants. On the other hand, the 100% agave tequila is clean and has been unfairly placed in the same category as it is said not to cause the headaches the tequila mixto does.

Types of Tequila According to the Aging Period

Depending on how long and in what type of container the tequila has been left to mature, there are four types of tequila: Blanco (white) or Plata (silver), Reposado (rested), Añejo (Vintage), and Extra Añejo (Extra vintage). The type of tequila you choose dictates its use; whether you make cocktails, have it as is, or pair it with something else, each tequila type has its unique characteristics.

Containing around 55% of alcohol, the tequila Blanco is what some call it “the essence of tequila.” This type of tequila is not left to age and mature and is bottled directly after the last distillation.

The tequila is at its most natural with this tequila type, as the flavor hasn’t been influenced by the aging process or the aging barrels, which is why it is also known as the essence of tequila.

The tequila Blanco is usually fruity with a vanilla whiff and is therefore excellent for mixing. You can sip this type of tequila slowly, as it is meant to savor and not pop it as a shot because each sip reveals another layer of taste. You can make margaritas or other fruity cocktails with this type of tequila.

Its taste is dimmer compared to that of the Blanco, as the oaky component has had enough time to rub into the tequila. It retains the fruity and vanilla flavor and aroma but has an added velvety dimension, making this drink suitable to sip slowly or mix in tequila cocktails.

Due to the aging period, the Reposado tequila has a more intense kick than the Blanco, with an overall more pungent taste.

Along with the Extra Añejo, this is the richest, most refined type of tequila with 40 to 50% of alcohol content. It is aged from one to three years and has a deep golden color covering your throat with pure velvet when you drink it.

Its taste is best described as deep, dark, dim, and absolutely seductive. It has retained the vanilla and fruity whiff but has an added oaky dimension topped off with butterscotch flavor.

This type of tequila requires utmost enjoyment, so if you aren’t a genuine tequila enthusiast, do not reach for this one, as it is a true shame to go to waste. The Añejo tequila doubles excellent for Scotch in scotch cocktails and is served neat in special tequila glasses.

With an alcohol percentage of 40%, this tequila type is left to age and mature the most, at least three years, and often much longer. This type of tequila’s quality is unparalleled and best described as an improved and even more elegant version of the Añejo tequila.

Due to the considerably long aging period, the oaky flavor and aroma are even more expressed in the Extra Añejo tequila, and the color is even deeper than that of the Añejo tequila. Pungent, strong-flavored, and velvety, this tequila type is the Mexican version of Scotch. 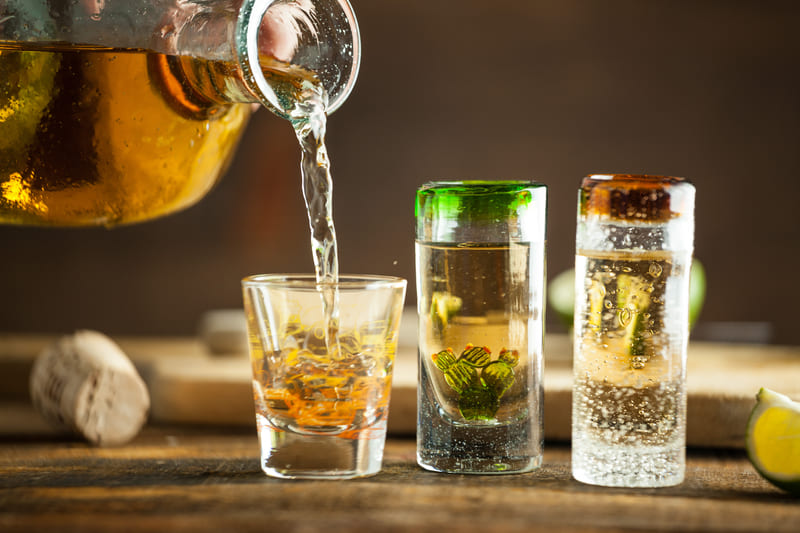 What Is the Smoothest Type of Tequila?

The smoothest type of tequila is definitely the Extra Añejo tequila which ages the most, at least three years, and usually way longer.

It is smooth and velvety, leaving a long-lasting aftertaste in your mouth and throat you don’t want to fade. It is almost like chocolate and honey intertwined with the recognizable tequila fire, mixed with the fruity whiff of the blue agave.

Still, it wouldn’t be fair to leave out the Añejo tequila, which ages from one to three years which is a slightly lighter version of the Extra Añejo type. It is also a very smooth drink but not as rich as the Extra Añejo.

What Tequila Is the Best?

To say that there is one tequila type that is superior to all the others would not be fair, and it would be very inaccurate as well, as all the tequila fans have their own tequila type. The only accurate generalization is to say that the 100% blue agave tequila is better than the tequila mixto, but even then, there will be someone who likes the mixto more than the 100%.

When discussing tastes, we should remember that it is a highly subjective matter, and one size doesn’t fit all.

The tequila Blanco is for you if you are a fan of clear-cut tastes and expressed edginess. You will like the water-like clearness of the drink and the expressive and sharp taste.

If dimmer and more velvety tastes are your cup of tea and you like your tequila more on the sweeter side, you should definitely go for the Reposado tequila.

Finally, if you like aged spirits with that recognizable warmth, velvety sensation, and almost chocolaty flavor, then the Añejo and the Extra Añejo tequilas are for you.

In summary, tequila is a drink you need to enjoy, and it isn’t everyone’s favorite. If you generally don’t like tequila, you won’t like any of the types. However, since tastes can surprise you, it is worth at least a try, as you may genuinely fall in love with it.

What Are the Different Types of Teremana Tequila?

Teremana is a famous tequila brand founded by the Rock, or Dwayne Johnson, known for its rich flavor and high quality. The Teremana tequila is a 100% blue agave tequila, and regarding its aging period, there are two types of Teremana tequila –Blanco and Reposado.

How Many types of Teremana Tequila Are There?

Depending on the type of tequila and the brand, the tequila prices start from about 25$ and can go as high as 2000$ per bottle, with the most expensive tequila being the Tequila Ley 925 Diamante sold for 3.5 million dollars.

Generally, the tequila mixto is more available and cheaper than the 100% blue agave tequila. Also, aged tequila is often more expensive than Blanco.