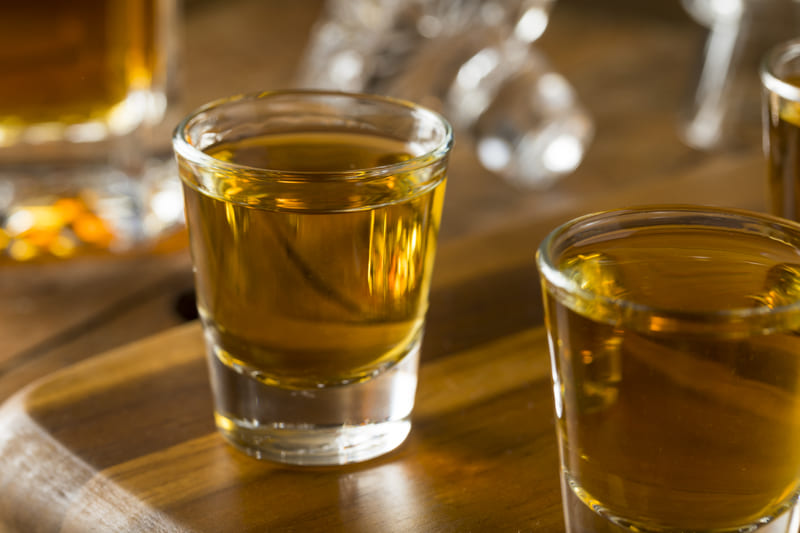 Fireball, a sweetened and cinnamon-flavored Canadian whiskey, was made in Canada in the 1980s. Nowadays, Fireball’s one of the top-selling whiskey brands in the USA.

Fireball technically isn’t a whiskey because it’s bottled at 33% ABV, whereas a standard ABV of whiskey is from 40-60%. Although this popular drink contains less alcohol than regular whiskey, you can still get drunk after a few shots.

Fireball is served as a shot, on the rocks, and in various mixed drinks and cocktails.

Most get drunk after consuming 4-5 shots of Fireball. Avoid drinking 6-8 shots because you might get intoxicated.

In today’s article, I will discuss Fireball in detail and why it’s been discontinued in some parts of the world, so let’s dive right in.

A Fireball shot isn’t strong because it contains 33% ABV. This distilled spirit’s made of Canadian whiskey, sweeteners, and cinnamon flavoring.

Fireball has a lower ABV than regular whiskey. So, it’s not technically whiskey.

Also check: How Many Shots To Get Drunk: 16 Types of Alcohol

This flavored whiskey has a sweet-spicy cinnamon flavor. You can drink Fireball alone or enhance the flavor of various mixed drinks and cocktails with this whiskey.

Can One Shot of Fireball Get You Drunk?

One shot of Fireball contains less alcohol than a shot of regular whiskey and won’t get you drunk unless you’re a newbie. However, how fast you will get drunk doesn’t depend only on the amount of alcohol you drink.

It also depends on the type of alcohol, ABV, how fast you drink, gender, weight, alcohol tolerance, food consumption, and other factors.

It’s better to drink one shot of Fireball to relax than to drink more and get drunk because you won’t have control over your behavior.

Also check: How Much Whiskey to Get Drunk

How Many Shots of Fireball Equal a Beer?

How Many Shots of Fireball is Too Much?

Fireball isn’t as strong as regular whiskey, but it still can make you drunk. The amount of Fireball shots that are too much and can get you drunk varies and depends on many factors.

Usually, 4-5 shots of Fireball are too much and will get you drunk, while 6-8 shots will get you even more intoxicated and give you a bad hangover.

It’s important to know that each person reacts and has a different alcohol tolerance. One can easily get drunk with only one shot of Fireball, while the other can drink 3-4 shots and still be in good condition.

How Much Fireball Does it Take to Get Tipsy?

Depending on your gender, age, weight, food consumption, how fast you’re drinking, and other factors, the amount of Fireball that can get you tipsy varies. Usually, 2-3 shots of Fireball will get you tipsy, while 4-5 shots will make you drunk and feel dizzy.

Fireball has a sweeter and milder flavor than regular whiskey and can easily make you drink more. Therefore, it’s best to drink Fireball or any other alcohol reasonably without getting drunk and enjoy the drink not feeling dizzy or throwing up. You can accomplish that if you stick to one shot of Fireball occasionally.

How Long Does it Take for Fireball to Kick in?

Fireball takes about 30 minutes to one hour to kick in. After an hour, depending on the amount of the Fireball you have drunk, the alcohol will affect you even more, and if you continue to drink, you will get drunker.

Alcohol will affect you for about 3-4 hours, and you can feel sick, throw up, have poor coordination, feel dizzy, and have trouble sleeping.

You can crash your car, get arrested, and go to jail if you’re drinking and driving. That’s why you should never drink and drive.

How Much Alcohol is in a Shot of Fireball?

A shot of Fireball has 33% ABV and isn’t as strong as a regular whiskey, but it can still make you drunk. Don’t be fooled by the lower ABV of Fireball.

Drink responsibly and never drink and drive to avoid potential accidents and put your and other people’s lives in danger.

Key Factors That Determine How Quickly a Person Feels Drunk

Many key factors determine how quickly a person feels drunk.

One of those factors is food. Most of the alcohol you drink is absorbed through the small intestine into the bloodstream, and if food is present, it will slow down its absorption.

As for gender, men are usually bigger than women and have a bigger blood volume, so if a man and woman drink the same amount of alcohol, the woman will get drunk faster.

The reasons for this are the differences in hormones, metabolism, and body structure. Women’s body has 52% of water, less than men’s, which has 61% of water.

In other words, a woman’s body can dilute less alcohol than a man’s.

Body weight is another factor affecting how fast you will get drunk.

People who weigh more have more water in their bodies and get drunk slower because the alcohol in their blood is diluted more than in people with lower body weight.

Regular alcohol consumption can increase your tolerance to ethanol effects because your brain will memorize and learn how to respond to high amounts of alcohol in your blood.

People who consume alcohol daily and are heavy drinkers will not show significant signs of intoxication, like talking incomprehensibly and getting out of balance.

Their brains are used to high doses of alcohol; therefore, they will continue to drink, thinking they are not drunk. But that isn’t the case if you don’t drink alcohol often and aren’t used to it.

Water intake can also help you not to get drunk after the first shot of alcohol. Because water will dilute the alcohol, it will be absorbed in your bloodstream, and your liver will need more time to process it. You can also drink water before and after drinking alcohol to help you with dehydration and hangover.

Whiskey and other alcoholic drinks are dangerous for people with some health conditions. Therefore, if you have any chronic disease, you’re sick, or you were ill and now recovering, you will get drunk faster because your body and immune system are weak.

Many people also have alcohol intolerance and can’t drink any alcoholic drinks.

We all know that medications, drugs, and alcohol are not a good combination, especially antidepressants and sleeping pills.

Taking these pills and drinking alcohol can affect your motor skills, coordination, and judgment. You can also feel sleepy and unable to drive; in the long term, this fatal combination can cause damage to your internal organs.

Taking painkillers and drinking alcohol can damage your liver, while an alcohol and aspirin combination can increase the risk of internal bleeding.

Therefore, if a person takes any medication, it’s best to consult a doctor before using whiskey or other alcohol.

Sleep regimen also affects how fast you will get drunk drinking alcohol. Some studies tried to reveal the link between sleep regimen and alcohol tolerance.

These studies conclude that if you have slept enough before consuming alcohol, you will be more tolerant of alcoholic drinks. While if you’re sleep-deprived for 1-2 or more days, you will get drunk faster.

How Much Alcohol Is In Fireball Cinnamon Whiskey?

This popular drink is 66 proof which means it contains 33% ABV. It contains less alcohol than standard whiskey, which has 40-60% ABV.

However, don’t be fooled by the lower alcohol content and the sweet flavor. The Fireball Cinnamon Whiskey can make you drunk like any other alcohol.

Does Fireball Give You A Hangover?

Drinking larger amounts of Fireball will give you a bad hangover. Fireball is sweetened whiskey with a sweet, pleasant cinnamon flavor that masks the alcohol flavor and makes you drink more.

One 1.5 oz serving of Fireball has 11 gr of sugar and 108 calories. Its high sugar content will increase your blood sugar levels, giving you a headache and a hangover the next day.

If you want to avoid a hangover, don’t consume drinks containing high sugar amounts, and drink alcohol in moderation.

Overconsumption and extended use of alcohol are bad for your health, and that goes for the Fireball, too, even though it contains less ABV than regular whiskey.

Can You Drink Fireball Whiskey by Itself?

You can drink Fireball whiskey alone, either chilled or at room temperature. You can also add Fireball in different cocktails and mixed drinks because it has a nice sweet-spicy cinnamon flavor.

Does Fireball Have Antifreeze in it?

Fireball doesn’t have antifreeze and is 100% safe to drink.

In 2014, Sweden and Finland found that Fireball contained higher amounts of propylene glycol (antifreeze ingredient) than the EU limitations of 1 g per kg.

According to USA regulations, the limit for propylene glycol was 5 g per kg and safe for use. Therefore, Norway, Sweden, and Finland recalled the Fireball.

The company replaced the recalled batches, and Fireball was allowed to sell in the EU again. Since 2018 Fireball doesn’t use propylene glycol in its products.

Does Fireball Have Ethylene Glycol in it?

Fireball doesn’t have ethylene glycol in it.

Why is Fireball Whiskey Bad for You?

One 1.5 oz serving of Fireball has about 11 gr of sugar and 108 calories, while one shot of regular whiskey has 70 calories and 0 gr of sugar.

The high sugar content will give you a bad hangover and a headache.

Did They Discontinue Fireball?

Fireball was discontinued in 2014 in Norway, Sweden, and Finland because it contained higher amounts of propylene glycol than the EU limitations of 1 g per kg.

The company replaced the recalled batches, and Fireball was allowed to sell in the EU again. Since 2018, Fireball doesn’t contain propylene glycol.

Many factors affect how many shots of Fireball or other alcohol will get you drunk, such as your gender, age, weight, food consumption, alcohol tolerance, health condition, etc.

So, it’s best to drink reasonably and not put your and other people’s lives in danger.

Don’t drink and drive or operate heavy machinery because alcoholic drinks, including Fireball, slow down your central nervous system and affect your balance, coordination, reflexes, concentration, and vision.

I suggest having 1-2 shots of Fireball instead of getting completely wasted and batling a bad hangover in the morning.