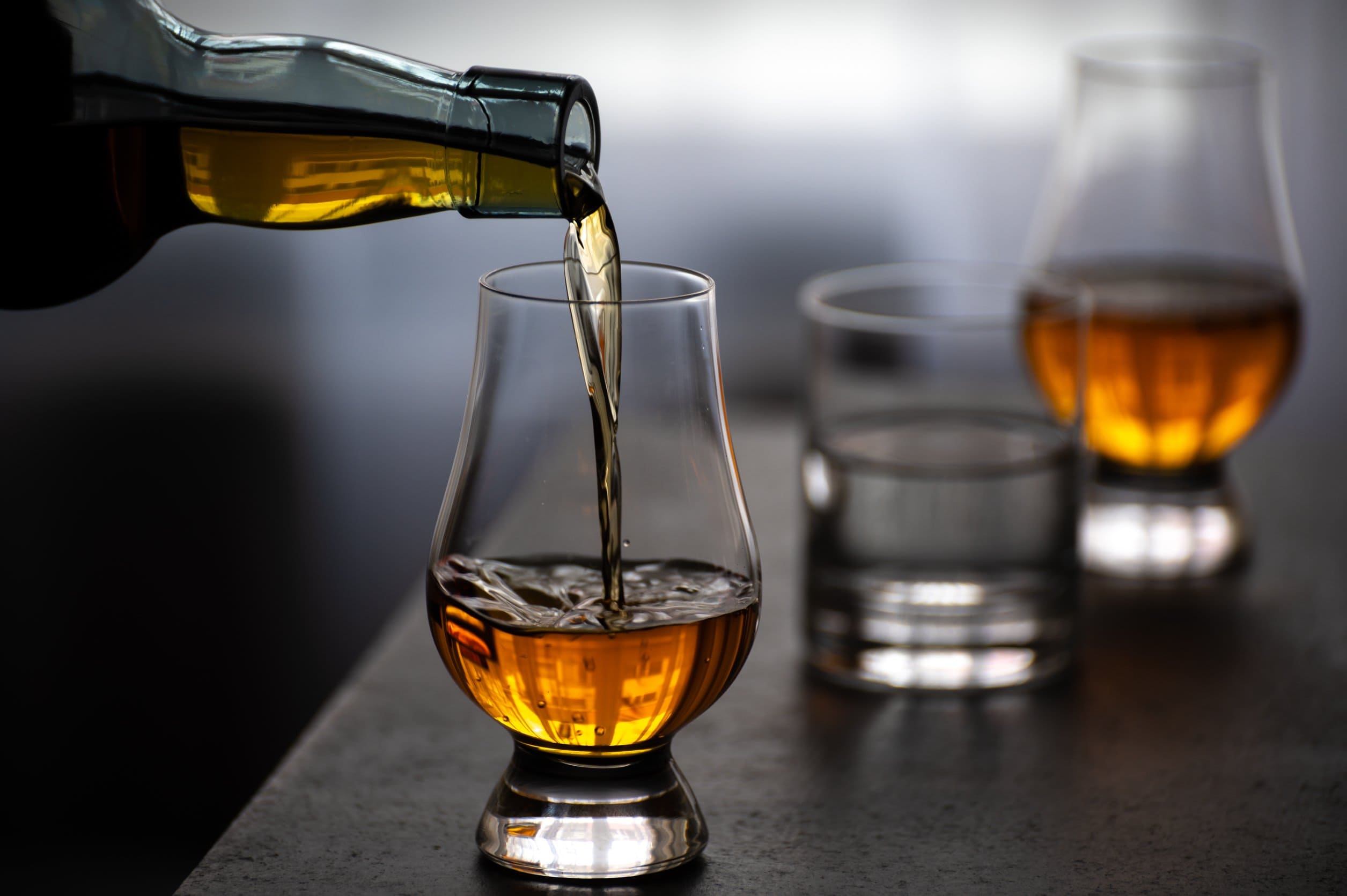 Did you know that Glenfiddich Single Malt Whisky and Glenlivet Single Malt Scotch Whisky are two of the most popularly known and trusted whisky brands in the world?

The distilleries responsible for producing Glenfiddich and Glenlivet have been in business for an extremely long time and have paved the way for an extensive collection of whiskies!

In my opinion, Glenlivet wins due to its comparatively more innovative offerings. Glenlivet offers more options as compared to Glenfiddich which was kickstarted almost four decades later.

However, whisky enthusiasts can enjoy both Glenfiddich and Glenlivet due to their extremely unique flavor profiles! The former exudes a woody and creamy taste complete with palpable grassy and creamy pear notes. Meanwhile, Glenlivet is known for its comparatively sweeter profile with strong hints of orange and vanilla.

Dive in to learn more!

Glenfiddich is a globally renowned single malt scotch whisky which originated in Scotland. William Grant, the founder of the Glenfiddich whisky, started their very own distillery in 1886 at Dufftown, Scotland.

As Glenfiddich is a type of single malt Scotch whisky, it means that this Scottish whisky is made from malted barley and is brewed at a single distillery via the pot still distillation process.

The water used for the distillation process of the Glenfiddich whisky is derived from the Robbie Dhu Springs which is located in close proximity to the William Grant and Sons distillery at Dufftown, Moray, Scotland.

The maturation process of this whisky takes place in a wide range of casks including the Rum casks from the Caribbean, the popular Sherry butts of Spanish origin, and the American Bourbon whisky casks or barrels, among others.

After the aging process is complete, the casks or barrels are carefully emptied and the water from Robbie Dhu Springs in Dufftown, Scotland is used to brew the popular brand of whisky.

Due to its centuries’ worth of heritage, Glenfiddich distillery is extremely popular with tourists as well as connoisseurs of alcoholic beverages such as whiskies.

You will enjoy Glenfiddich whisky more if you are into single malt Scotch whisky that has a woody and creamy flavor profile with strong and palpable grassy notes as well as hints of creamy pear. This world-famous whisky also exudes a vanilla taste which has hints of dried pear notes.

Glenlivet distillery has been in running for a longer time than the Glenfiddich distillery. This distillery kept running throughout the Great Depression period and its popularity grew by leaps and bounds following the war.

Glenlivet is referred to as a Speyside Distillery and here is why. Single malt Scotch whiskies that are brewed in the Strathspey region around River Spey in Moray are known as Speyside single malts. Just like Glenfiddich, Glenlivet also originated in the Speyside region.

Glenlivet is known for its distinctive sweet profile which gives off an orange and vanilla-specific taste. As a result, this famous whisky is typically enjoyed by whisky enthusiasts who enjoy sweet-tasting alcoholic beverages.

Glenfiddich vs Glenlivet: What Is the Difference?

Both Glenfiddich and Glenlivet are types of single malt Scotch Whisky that originated in Scotland. They are types of Speyside single malt due to the close proximity of their respective distilleries to the Strathspey region in Scotland. Here are some key differences between both brands of whiskies.

The famous Glenlivet whisky came into being when illicit whiskies ran rampant in Scotland. According to historical records, the 4th Duke of Gordon was largely responsible for legitimizing these illegal distilleries via the passage of the 1823 Excise Act.

Unlike other distilleries that failed to flourish during the Great Depression, Glenlivet remained popular with the population and became even more famous following the war. It is now the most popular malt Whisky in the United States and the 4th best-selling malt Whisky in the UK.

Glenfiddich distillery was founded a couple of decades after the Glenlivet distillery. Produced by William Grant and Sons in Dufftown, this Scottish whisky distillery ran its first batch of single malt whisky for the very first time on Christmas Day of 1887.

A prohibition placed on these whiskies in the 1920s by the US resulted in a drop in business profits and further impeded upon business expansion-related goals. Following further difficult times in the 60s and 70s, the popularity of the whisky gradually took off.

The producers of Glenfiddich whiskey recognized the need for more lucrative packaging such as tins and tube bottles as well as the significance of duty-free markets. Now, this single malt Scotch Whisky from Dufftown, Scotland is sold in 180 countries and is single-handedly responsible for 35% of single malt sales.

The Glenfiddich single malt Scotch whisky is brewed at the Glenfiddich Distillery in Dufftown, Moray, and uses the pot still distillation process for effortless whisky production. As it is a single malt whisky, it is made from malted barley.

Both Glenfiddich and Glenlivet are Speyside whiskeys that use water from natural springs. However, the sources of the water vary. Unlike Glenfiddich which uses water from the Robbie Dhu Springs, Glenlivet uses water from Josie’s Well. The water is poured into giant vats and carefully mixed with yeasts for successful distillation.

Both the Glenfiddich and Glenlivet whisky undergo a two-step distillation process to attain the light and smooth texture that they have become popularly known for.

When it comes down to fermentation, both types of whiskies use the chill-filtration process for the production of a clear-looking liquid. Placement of these whiskies in different casks results in their colors being influenced.

Even though both Glenfiddich and Glenlivet are single malt Scotch whiskies that are made from malted barley, their sources differ. However, the processes which lead to the production of mash bills are the same. In this process, the grist or powdered barley is converted into a mash and the grist is carefully mixed with water to achieve a dough-like form.

When you taste Glenfiddich, you will sense notes of various flavors including cream notes, dried fruits, toffee, wood, hints of vanilla, and more. The maturation process in Sherry casks may be the reason behind the fruity and light taste of the alcohol.

Glenlivet is on the sweeter side and exudes spicy and oak notes. The latter could be the result of the maturation process that takes place in American and European casks. Eventually, the taste transforms into a citrusy one with hints of fruity notes and maple syrup.

If you are someone who is drawn to single malt Scotch whisky based on its aroma, then you will be glad to know that these two different types of whiskies vary in scents as well.

Glenfiddich has a light scent that comes from whipped cream and dried fruits. Meanwhile, there is also a distinctive sweet scent that is the result of brown sugar.

Glenlivet is known for its citrusy scent and the light scent of golden apples. Glenlivet owes its sweet fragrance to maple syrup.

Types of single malt Scotch whisky, both Glenfiddich and Glenlivet vary in colors as well. Glenfiddich has a distinctive golden hue which is due to the aging process that takes place in sherry casks and bourbon barrels. Certain brands of Glenfiddich whisky also give off a rich golden amber color.

Meanwhile, Glenlivet exudes a bright and vibrant golden hue. Over time, you may start to notice slight changes in its color as the whisky ages.

Which is Better: Glenfiddich or Glenlivet?

Glenlivet came into being much earlier than Glenfiddich and both Single Malt Scotch Whisky vary quite a bit in their tastes.

Let’s compare to see which Scotch whisky is a bit better than the other:

Glenlivet came four decades before Glenfiddich’s production kickstarted in Scotland. However, it was the marketing tactics used for Glenfiddich that made single malt Scotch Whisky popular all around the globe.

Before Glenfiddich came into being, single malt Scotch whisky was hardly marketed or sold outside of Scotland. Fans of single malt owe a lot to the makers and owners of Glenfiddich for spreading the word about this extremely sought-after alcoholic beverage.

Both the distilleries responsible for the production of Glenfiddich and Glenlivet have paved the way for numerous drinks to cater to varying palettes.

Both Glenfiddich and Glenlivet distilleries have also introduced limited edition alcoholic beverages over the years. The limited editions released by the distillery responsible for the production of Glenlivet Single Malt include the Alpha and the Guardians collection as well as the Winchester collection.

Additionally, the limited editions released by Glenfiddich distillery include the Age of Discovery range in addition to the 30, 40, and 50 years old collections.

As compared to the Glenfiddich, the Glenlivet’s palette is a bit hotter. It is due to the spice and oak which is part of its flavor profile. Glenlivet is also known for its iconic zest that comes from orange.

Glenfiddich offers a well-rounded palate but is known for its strong and extremely palpable grassy notes. Glenfiddich, therefore, sits on a fine line between sweet and bitter.

When it comes to how the alcoholic beverages feel to the nose, Glenlivet is louder or stronger. The malt is more obvious and you will also detect a strong citrusy smell.

In my opinion, Glenlivet fares slightly better than Glenfiddich when it comes to the overall flavor profile, range, and aroma, among better things.

However, personal preferences pertaining to single malt Scotch whisky may vary. For instance, Glenfiddich is the best choice for consumers who enjoy a light and delicate fragrance. If you are someone who enjoys a drink that has a woody and creamy taste, you should go for Glenfiddich rather than Glenlivet.

Which One Is Costlier: Glenfiddich or Glenlivet?

The price range varies from product to product for both Glenlivet and Glenfiddich.

You can acquire the 21-year-old Glenlivet Single Malt Scotch Whisky for roughly $300. You can also get your hands on an 18-year-old bottle and a 15-year-old bottle for $120 and $70 respectively. The cheapest is the 12-year-old bottle which is priced at $52.99. All the aforementioned prices are with regard to 750 ml bottles.

The 21 yo bottle of Glenfiddich is available for $199. Meanwhile, you can buy the 18-year-old Glenfiddich and the 15 yo for $120 and $75 respectively. The prices mentioned are with regard to 750 ml bottles.

Which is Smoother: Glenfiddich or Glenlivet?

Glenfiddich is easier to drink since it’s smoother than Glenlivet. If you are new to the vast world of Single Malt Scotch Whisky drinks, Glenfiddich serves as a good starting point.

However, Glenlivet is the better option for those who prefer single malt Scotch whisky which is equipped with a stronger aroma and flavors.

Is Glenlivet a Good Whiskey?

Glenlivet is popular worldwide for its unique flavor profile and distinctive aroma. Glenlivet is a strong-tasting single malt Scotch whisky that comes with a hint of orange and aroma.

Is Glenfiddich a Good Scotch?

Glenfiddich has become an extremely well-known single malt Scotch drink since its inception and is easier to drink than Glenlivet. It has a sweet and bitter taste with strong hints of grassy notes.

Both Glenfiddich and Glenlivet distilleries are well-known across the world for their wide range of offerings. In fact, Glenlivet is the most popular single malt Scotch drink in the USA. On the other hand, Glenfiddich is the biggest selling single malt across the entire world.

If you wish to learn more about different single malt scotch whiskies that exist, Glenfiddich is the best option to start things off due to its softer and subtler flavor profile. You can then move on to stronger beverages like Glenlivet to diversify your choice of drinks!