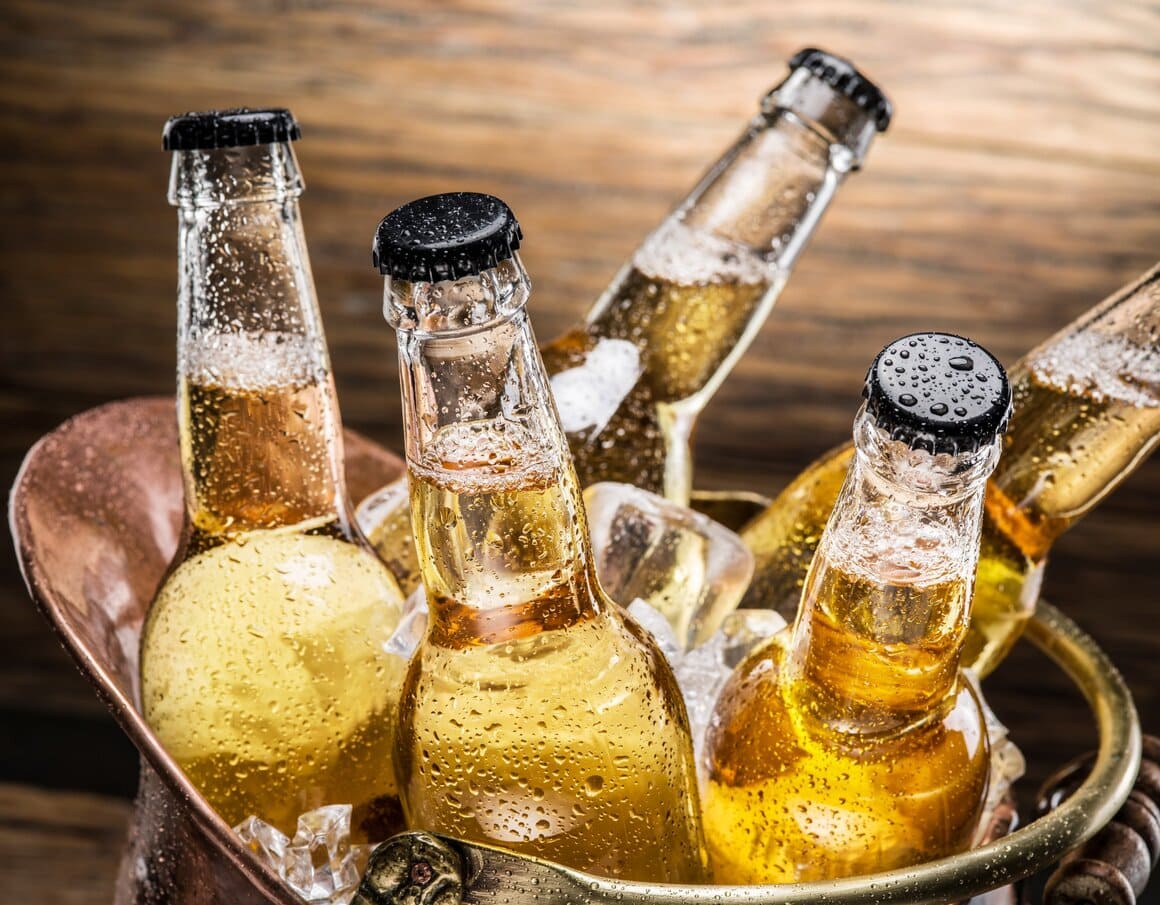 Corona beer is one of the most popular beer types worldwide and there is no wonder about that considering its delicious taste and innovative marketing strategies.

The brand has also an incredible history and it remained faithful to its initial recipe and values for almost a century.

Coronita and Corona are often confused as being the same drink and that is not entirely wrong. Both of these drinks have the same ingredients, taste, and even color. But the difference is that they come in different sizes.

In Spanish, the term “ita” stands for little, and corona stands for the crown. So. Coronita means little crown. Coronita is just a smaller version of the regular Corona beer. But let’s look more in-depth at these two drinks and see how similar and how different they are!

In the following table you will find both the similarities and the differences between Corona and Coronita so you will know exactly what to expect when choosing one or the other!

Both Corona and Coronita are very popular beers worldwide but the Corona takes the stage in terms of notoriety. Corona comes in several flavors and it was developed for the better along its impressive history.

Corona is a beer brand that was launched in Mexico by Grupo Modelo, owned by AB InBev, a Belgian company. The first time Corona Extra was brewed was in 1925, which gets the brand close to its first century anniversary.

Coronita is the same Corona beer that comes in a smaller serving and we will explain that further in our guide. This mini version of Corona beer is made by the same company that makes Corona and all its versions.

Both Corona and Coronita contain the same ingredients so you will not find a significant difference in terms of taste as you would most likely expect. These drinks are made of barley malt, corn, hops, yeast, ascorbic acid, and propylene glycol alginate. The manufacturing of both Corona and Coronita is the same.

Only the finest ingredients are used to put together the famous Corona beer so the taste profile of this beverage will not disappoint you. It has a fruity flavor and it is less bitter compared to other beers.

The traditional version of Corona is Corona Extra but you can find it in different variations such as Corona Light, Corona Familiar, Corona Premier, and, of course, Coronita which is essentially Corona Extra in a smaller size.

Most people like Corona and Coronita the same since they bring the same flavor to the table. You can taste a balanced and discrete malt flavor and a fair amount of sweetness. A great quality of this beer is that it doesn’t leave a bitter aftertaste like many other beers.

Both the Corona Extra as well as Coronita, come with the same alcohol content of 4.6%. This ABV makes Corona beer a mild one in terms of strength. The moderate level of alcohol in this beer is also one of the reasons why it is so popular.

The price of Corona and Coronita is fairly similar. But considering that Coronita comes in a smaller size it tends to also be cheaper in some stores, even if this is not the norm.

You can purchase a 6-pack of Corona Extra for about $8 to $9 and a 12-pack for about $14. Coronita comes at a similar cost and if you notice, the bigger the packs are, the smaller the price per bottle of beer is. So, it might be worth it to purchase your beer in bigger quantities and store it so you can enjoy it as you wish.

Is Coronita the same as Corona?

Even if both Corona and Coronita contain the same type of Corona beer, with the same alcohol content, there is an obvious difference between them. The Coronita bottle is smaller than the regular Corona bottle.

The bottle of Corona Extra comes in a size of 330 ml or 11 ounces. Coronita bottles are 210 ml or roughly 7 ounces.

So, the difference between Coronita and Corona Extra is that Corona Extra brings 120 ml more of beer in one serving.

There is another serving difference, however, that is worth mentioning. Corona Extra comes traditionally with lime as a way of serving it while Coronita is served without lime. But this is just the traditional way of serving these drinks. You might still find locals that add a wedge of lime to Coronita too.

Why is Corona called Coronita in Spain?

The distinction between Corona and Coronita is clear worldwide but in Spain, these drinks can get to be confusing. If you are in Spain you will see that all Corona beer is called Coronita, even if it comes in a regular size of Corona Extra bottles.

In Spanish, Corona means crown and the word Coronita means little crown. But the reason why Spanish people call Corona, Coronita is a matter of brand ownership.

In 1907 the producer Bodega Torres was launched in Spain and it owned the brand name Corona. So, the Spanish brand Corona existed for around twenty years before the Mexican beer Corona appeared on the market, in 1925.

Since the brand Corona already existed in Spain, the beer with the same name had to be renamed Coronita, regardless of the size of the bottles it comes in.

Does a Coronita have more alcohol?

There is a misconception that leads many people to think that Coronite has a higher alcohol content because it comes in a smaller serving and, therefore, it might be stronger. But this is not the case. Both Corona Extra and Coronita have the same alcohol content of 4.6%.

Coronita didn’t replace the traditional Corona beer (unless you are in Spain where it can be seen as such). Coronita is just a smaller version of Corona. The two beers will have the same taste, color, and ABV and they would be made of the same ingredients and in the same way.

When it comes to Corona beer, Corona is the name of the brand while Corona beer can come in different variations from Corona Extra to Corona Light, Corona Familiar, and Corona Premium as well as Coronita. But the traditional Corona beer remains the Corona Extra version of it that you will also find in the majority of stores worldwide.

You will notice that Corona Light and Corona Extra are similar in overall appearance but they are different in taste. Corona Extra has a bitter taste and a stronger flavor while Corona Light has a milder level of bitterness and a more discrete flavor.

Also, Corona Extra comes in golden-yellow while Corona Light has a more defined yellow shade. However, the color differences are not easily noticeable to those who are not familiar with this beer.

Note that Corona Extra has an ABV of 4,6% and Corona Light has an ABV of 4,1%, which makes it a weaker type of Corona. But even so, the difference is somewhat negligible so this is not always a criterion to choose one beer over the other.

Coronita tastes just like Corona Extra and it is identical in color as well. Also, this mini Corona has the same ABV as Corona Extra. So, besides the difference in size, you will not notice other differences between these two drinks, which is why many people consider them the same.

More: How Many Beers to Get Drunk?

Coronita’s alcohol content is 4.6% by volume and 3.6% by weight. Even if it is the strongest version of Corona, just like Corona Extra, this beer is considered an easy-to-drink beer and it is suitable even for those consumers that are not fans of the bitterness that beers usually come with especially as their aftertaste.

Coronita Extra has the same alcohol content as Corona Extra. Even if Coronita comes in smaller bottles of 210 ml, its ABV is still 4.6%.

If you heard about CoronaRita, you are most likely curious to know what this drink is. You can think of CoronaRita as a Mexican version of Margarita, which you probably guessed already from the suggestive name of this drink. It is easy to prepare and one of the most refreshing drinks for Corona lovers.

You will have to put the ice cubes, lime sour mix, tequila, and triple sec into a cocktail shaker and give it a firm shake for five to ten seconds.

Pour the mix into a pint glass or your favorite cocktail glass and add salt to the rim. Open the bottle of Corona beer and flip it upside down as you place it into the drink. The beer will spread slowly into the drink as you enjoy your cocktail with a straw.

You noticed that this drink is not served in the Margarita glass that you might be used to and it is slightly different in taste considering that you will add Corona beer to it. But it is one of the cocktails you have to try out at least once and who knows, it might even become your favorite drink!

How to drink your Corona Extra or Coronita

Like any other beer, Corona can be enjoyed neat or as part of different mixed drinks and cocktails. CoronaRita is a particularly popular cocktail with this beer and you can use either Corona Extra or Coronita to put it together.

Your Corona will taste best cold or with a few ice cubes and if you are having Corona Extra, don’t forget about the wedge of lime. The citrus and bitter flavor of the lime will offer your beer a more intense and inviting taste with every sip and you might not even like it as much without the lime wedge.

Some people will add a lemon wedge to their Corona Extra bottle, but this is not how the beer is traditionally served.

Coronita on the other hand is not served with lime in the traditional form. But nothing stops you from enjoying it like that too if you like the flavor that the lime brings to your drink.

You can replace the beer in a beer cocktail with Corona beer, either the Corona Extra or the Coronita version as you please, and your mixed drink will taste delicious.

Among the most famous drinks that require beer as one of their ingredients are Classic Chelada, Beer Margarita, Michelada, or Black velvet.

Now that you are aware of the difference but also the similarities between Corona Extra and Coronita, you will know exactly what to get next time you are in a pub or club.

And you can feel free to enjoy such beers at home in the combination that you like since they are mild drinks and very versatile.

While Coronita is a bit more difficult to find than Corona Extra, ultimately, you can find both of these versions of Corona beer online in packs of a different number of bottles.

Regardless of your choice, you can’t go wrong with Corona beer. And if you are a beginner in terms of drinking beer, you can start with a Coronita since it comes in a smaller serving!