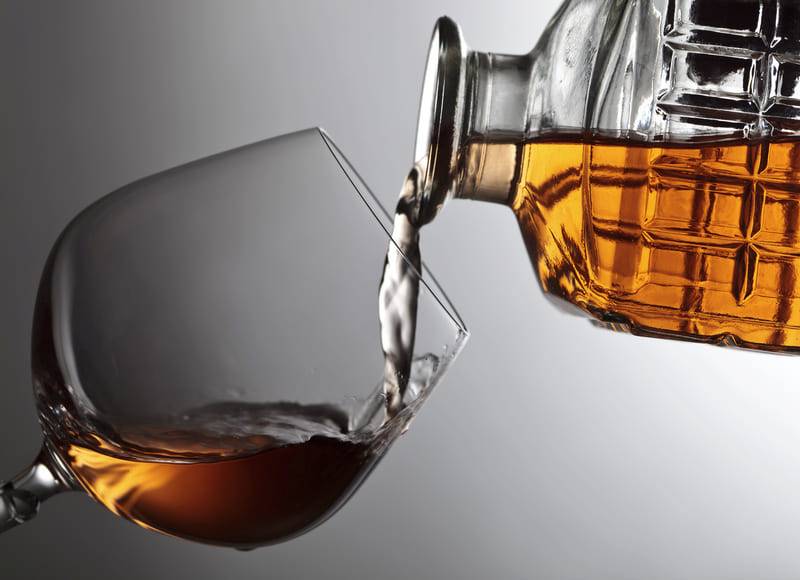 Both bourbon and brandy are prevalent alcoholic beverages. You will find these two types of spirits almost everywhere in the world and if you are a beginner in the matter, the chance of thinking they are the same is high.

But these beverages have their similarities as well as their differences. Keep reading to eliminate the confusion and know everything you need about brandy and bourbon!

Bourbon is whiskey and brandy is a type of distilled wine. While brandy and bourbon look similar as they have a similar color, they are different in taste. But there are other key differences you need to be aware of when choosing between these 2 drinks.

Most important differences between bourbon and brandy

Before you choose between brandy and bourbon, it is important to understand the main aspects that set these two drinks apart. While the resemblances between bourbon and brandy might be easier to notice, the differences are not so obvious to all consumers.

In terms of origin, bourbon and brandy couldn’t be more different. Bourbon is a type of whiskey that can only be made in the United States to be labeled as such. However, nowadays, you will easily find it sold in other parts of the world as well.

Brandy is a drink that originates in France and is initially made from Champagne grapes. The recipe and ingredients of this drink evolved, but the original bourbon is still made of these grapes.

The history of brandy goes back to 1313 when it was considered a medicine and often known as the “water of life.” Later on, brandy was brought to Holland by merchants in the 16th century.

They left the brandy in the French barrels more than they should have, and its aged taste gave it the brandy flavor we know today. During this time, different types of brandy appeared according to the timer the drink was aged and the main fruits used to produce it. 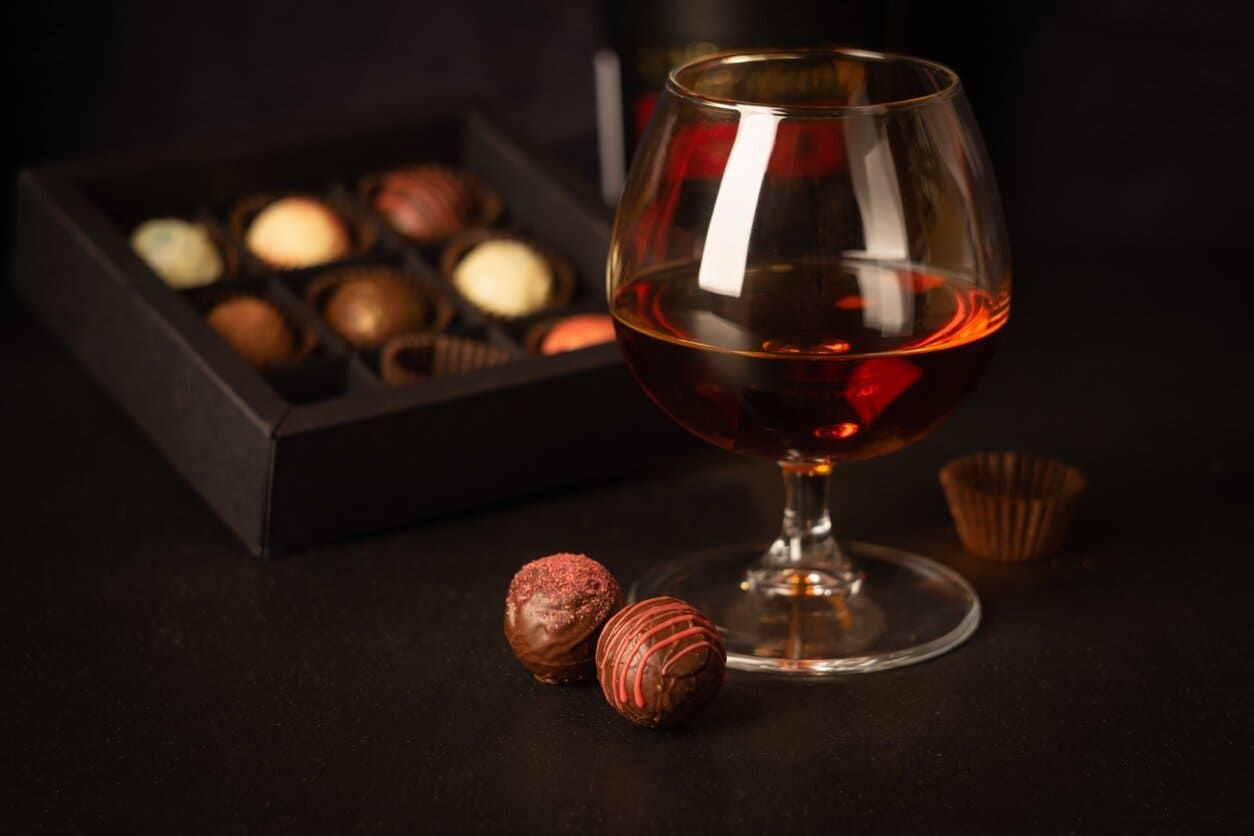 How is it made

Bourbon and brandy are fermented drinks, but they are not made entirely the same, even if the process is fairly similar.

Brandy is traditionally made of fermented grapes that come from France, but there are variations of the recipe that include other fruits. The juice extracted from these fruits is fermented, and the congeners (substances formed during fermentation) are removed.

After this step, the distillation process starts. Once the distillation is complete, the liquid will be stored in oak barrels for the aging process. Even if brandy is made primarily from grapes, some brands are made of apples, pears, peaches, and plums.

Different than brandy, bourbon is made from fermented grain mash. Half of this grain mash has to be corn, while the rest can be other grains that will define the final flavor of the bourbon.

This is also distilled and aged in American barrels made of oak. Bourbon can also contain maize or wheat. Production of bourbon is following the regulations in place for whiskey.

There is a lot of objectivity when comparing the taste of brandy with the taste of bourbon. Note that brandy is a broad label for spirits that are made from grapes, but they can also contain other fruits, and the aging time is not set in stone either. So, the flavor profile will vary as well, which makes it difficult to characterize all types of brandy at once.

Both drinks taste sweet and fruity, with different notes of oak, caramel and vanilla as well as an alcoholic hint. But the type of sweetness will differ.

Brandy will have a sweetness that comes primarily from the fruits used to make the drink. This fruity taste that is more present in brandy, is one of the most notable differences between the two drinks in terms of flavor profile.

However, bourbon seems to be sweeter than brandy, with notes of vanilla, oak, and caramel. The oak barrel flavor tends to be more present in the taste of bourbon than traditional brandy. 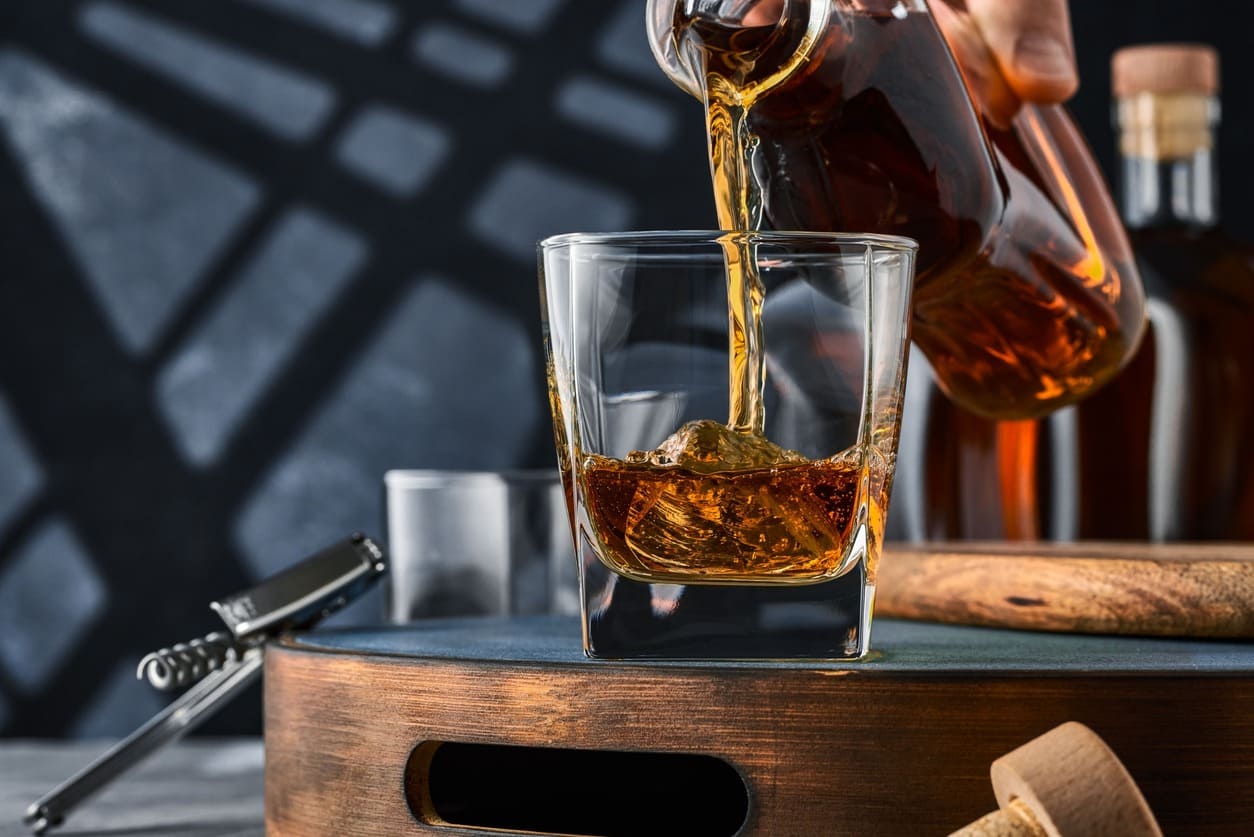 Brandy and bourbon can have similar colors, depending on the ingredients used to make them. Grape brandy can get darker if it is aged for more than two years. This type of brandy can go from a gold color to a more amber-like color as it ages.

Bourbon will start as a clear drink that gets to a brown shade during aging. The more the bourbon is aged, the darker its color will be.

You will find both brandy and bourbon in different types. However, all types of bourbon come from the United States, while brandy types can originate in France and other European countries.

Among the different types of brandy, you will find the traditional one made of Grapes, such as cognac. This brandy is double distilled in copper pot stills.

Cognac is aged for a minimum of two years, which gives it a very inviting flavor. But each country made its own version of brandy, so you will find Spanish brandy, Obstler, Pomace, Armenian and American brandy, as well as other types worldwide.

When it comes to bourbon, you will find standard bourbon, which is a traditional type of whiskey. This bourbon is much like Scottish whiskey, but it is made in the United States, just like all types of bourbon.

The most popular kinds of bourbon that you will find in stores are:

The alcoholic strength differs slightly as well when it comes to brandy and bourbon.

Brandy is a distilled spirit, and its alcohol proof can vary from 70% to 120%. So, a bottle of brandy could contain anywhere from 30% ABV to 60% ABV, depending on the manufacturer and production methods.

Bourbon, on the other hand, has to come with a maximum proof of 125%. This means that your bottle of bourbon can’t contain more than 62.5% ABV. Many manufacturers prefer to barrel the bourbon at a lower proof as the aging process strengthens the final alcoholic beverage.

There is a difference in price that you will notice when you purchase these two alcoholic beverages. Bourbon goes through a more simplistic production process compared to brandy. So, you will find bourbon at a more affordable cost, while brandy can be more expensive.

Plus, those who prefer brandy, they will always choose to purchase a more expensive cognac as it also comes with an exquisite taste.

The prices of these two drinks will vary depending on the brand that produces the brandy too. Traditional brandy can cost you around $50 to $60 per bottle on average, but some brands come at a much higher price tag. At the same time, you can expect to spend on a bottle of bourbon $30. 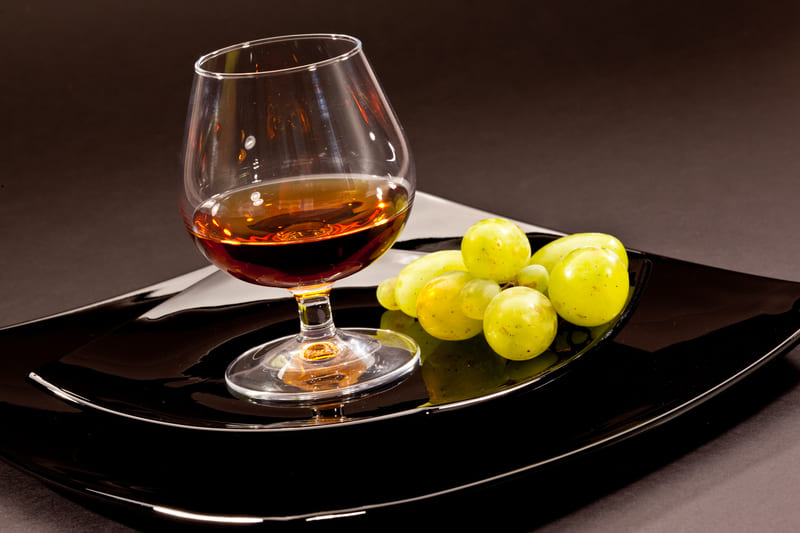 Is bourbon the same as brandy?

Bourbon is not the same as brandy. Considering the ingredients, the production process, taste, and the slight differences in color and alcoholic content, these spirits are significantly different.

However, if you are no expert in these spirits, you might find them more similar than different.

The aroma will also be slightly different as brandy tends to have more potent fruity notes than bourbon. But once you sip each one of these alcoholic beverages neat, you will notice the difference in taste rather fast, and there will be no room for confusion.

Besides the differences mentioned above, bourbon also leaves a stronger aftertaste. Consumers call that a burning sensation that is not present after drinking brandy. This difference comes from bourbon, which is made of grains, and brandy, which is made of fruits. 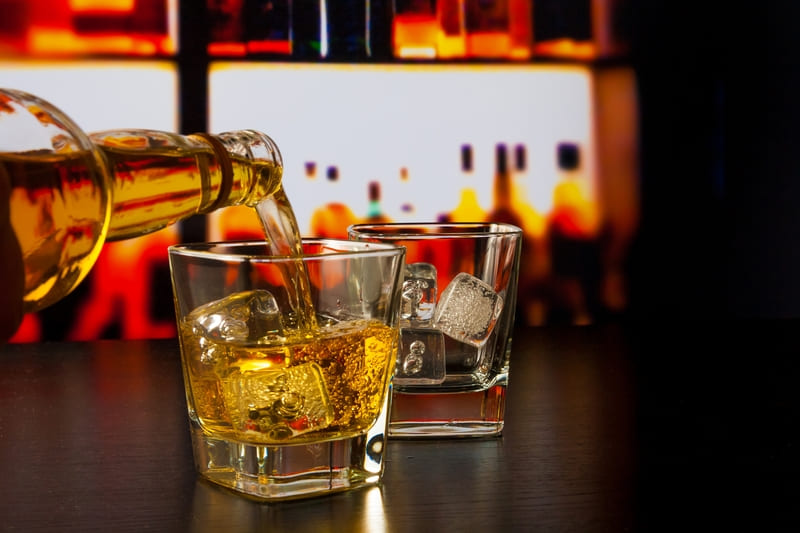 Can you substitute brandy for bourbon?

You will be happy to know that you can still use these drinks interchangeably despite the differences between bourbon and brandy.

They are similar in flavor and alcohol content, so the ultimate taste of your drink or dish will not change dramatically.

Both brandy and bourbon can be enjoyed neat, on the rocks, or as ingredients in different cocktails and recipes. And you can use one instead of another, depending on your availability.

When you use brandy and bourbon interchangeably, maintain the same ratio. There is no need to alter the rest of the ingredients either.

However, consider that brandy can come in a wide range of flavors, depending on the fruits used to make the spirit. So, depending on the brandy you choose, your final dish or cocktail might taste more or less fruity.

Similarly, bourbon will have a different type of sweetness than brandy, more specific to the oak barrels, and its caramel taste might also be stronger.

There are people that choose to substitute the brandy in their dish with bourbon simply because they prefer it like that. So, it all comes down to your personal taste.

Some famous cocktails that use brandy are the Metropolitan, Vieux Carre, Sidecar, Between the Sheets, and Champagne Cocktail. When it comes to bourbon, you will find it in cocktails such as the Boulevardier, New York Sour, or Kentucky Mule. And even if you can substitute brandy for bourbon or the other way around, these drinks will taste best with their original recipe. 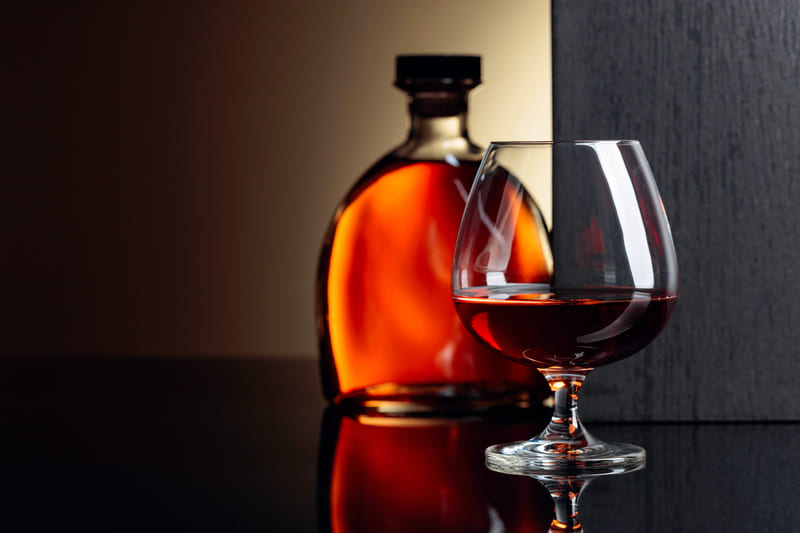 Is brandy smoother than whiskey?

Both these drinks can be considered smooth alcoholic drinks. But brandy seems even smoother than bourbon due to its main ingredients. Because it is made of fruits, brandy is not only smoother but has a different type of sweetness, and it will not give the burning aftertaste that bourbon gives.

The smoothness of brandy also makes it a favorite for softer drinks and consumers who prefer milder alcoholic beverages. It also tends to be more popular for desserts and toppings and pairs better with meat recipes. Bourbon has a more defined alcoholic taste, and it can be too strong for those unfamiliar with it.

Is cognac the same as bourbon?

There is confusion between cognac and bourbon, but the truth is that these drinks are not the same. Cognac is a type of brandy, while bourbon is a type of whiskey. That said, when you compare cognac with bourbon, you will find all the differences between brandy and whiskey.

Cognac also tends to be more expensive than bourbon, especially the type produced in France and aged more than two years. You will be able to find both cognac and bourbon worldwide, but the price will differ as well as the variety of brands.

Both brandy and bourbon are great drinks to have in your home. They taste great neat, on the rocks, or in different cocktails and cooked dishes.

These drinks have rich flavors and aromas that add personality and style to your dinner. You will not regret choosing one of them for your next meal or simply when you want to relax after a long day at work.