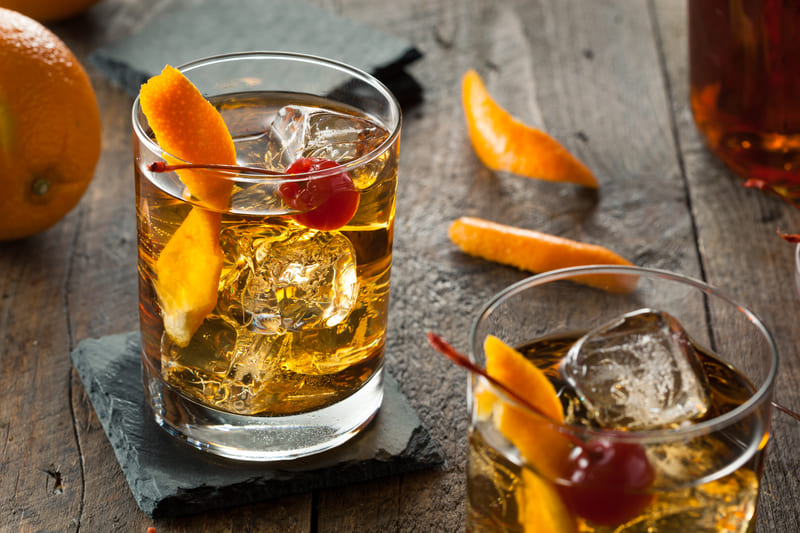 In the world of alcohol and cocktails, nothing is regarded as highly as bitters and at the top of the list for the best bitters is Angostura. As a brand that has been around for almost 200 years, Angostura Bitters were invented in 1824 as a medicine. The intense flavoring slowly crept its way into the bar scene and Angostura Bitters have remained one of the most famous and used brands of all bitters.

Regarded as one of the most important ingredients a bartender can use, bitters remain one of the most impactful ways to craft quality and exciting cocktails for patrons. Depending on what flavor profile you are looking for, there are plenty of options to help you create that perfect cocktail for yourself or your clients.

What If I Don’t Have Bitters?

If you are craving a drink like an Old Fashioned, it can be disheartening to discover that while you have whiskey, you are missing a key ingredient. Traditionally, Old Fashioned are made using the iconic taste of Angostura Bitters. However, there are many other brands and types of bitters on the market, but what if you don’t have bitters?

Luckily, there are other ways you can enjoy a classic Old Fashioned without adding a few dashes of bitters. The first thing you could do is make your own bitters.

Using a mortar or spice grinder, take whole spices and grind them until coarse. You can use peppercorns, cardaman, nutmeg, cilantro, cloves, cinnamon, or allspice. These warm spice flavors are classic in bitters. Then, add 2 tbsp of vodka and continue to grind together. Once combined, let sit for 5-10 minutes before straining through a cheesecloth. Be sure to use the mixture immediately.

If making your own bitters is not the way to go, you can mimic the bitter and sweet taste by adding fruit. The most common combination is orange and maraschino cherry. In a glass, add 1 orange slice, 1 cherry, and a dash of sugar. Muddle the ingredients together and add ice. Then you are ready to create your Old Fashioned. 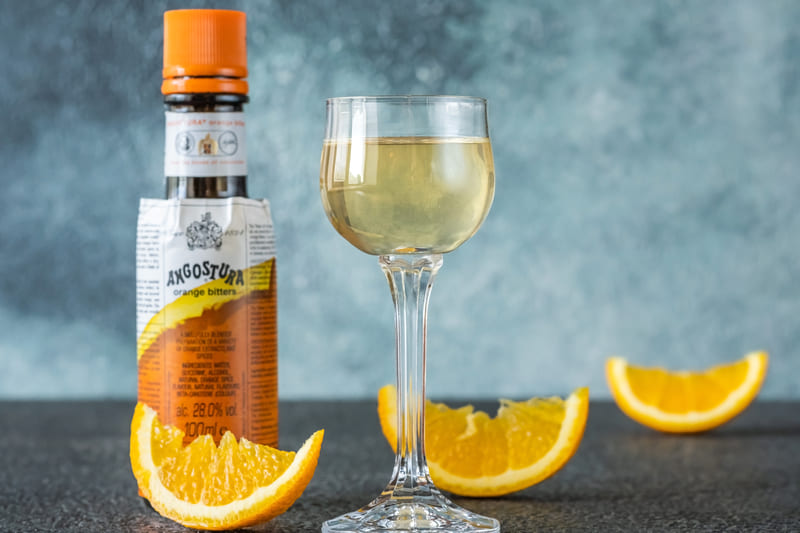 While bitters do contain alcohol, they are usually not considered to be alcoholic. This is because the amount of bitters added to a drink or consumed at one time is not enough to raise your blood alcohol level.

Bitters were originally used and prescribed as a medicine. Over time, these unique flavoring options made their way into bars all over the world and now remain one of the most iconic ingredients in many classic cocktails like Manhattans and Old Fashions.

In many bottles of bitters, the entire bottle has an alcohol content between 35%-45%. However, when bitters are used in a drink, you are adding a very small amount. One or two dashes is all that bartenders will add to drinks. Anything more than that and the intense flavors become overpowering.

You can technically raise your blood alcohol level by drinking lots of bitters, however, you would become incredibly sick before you would feel the effects of the alcohol.

Even with such a small amount of bitters being added to drinks, some people prefer to use substitutes without alcohol. Keep in mind that many people will say that even bottled bitters brands like Angostura Bitters are nonalcoholic if properly used.

However, if you are hoping to create a true mocktail that calls for bitters, you can always make your own using muddled fruit. Oranges and cherries seem to be the favorites due to the combination of sweet and bitter. They also add a dash of sugar for sweetness.

What Is The Same As Bitters?

In the world of alcohol terminology, it can get confusing as to what bitters or other types of spirits, liqueurs, or even liquor is.

Liquor and spirits tend to refer to the distilled, hard alcohol that is not sweetened. These tend to be 40 proof or higher. Whiskey, vodka, tequila, and rum are types of liquor or spirits.

When you hear liqueur, you should expect a small serving of a sweet, often flavored, and lower proof drink. These tend to be served after dinner and in smaller quantities. They can also be mixed into cocktails or mixed drinks. Cordial is another word that is often used when talking about liqueur.

In addition to liquor, spirits, liqueur, and cordials, you also have digestif drinks. These are usually had after a meal to help calm the stomach. These drinks tend to have digestive aiding ingredients and some sugar.

While all of these concoctions can be had alone as a drink itself, bitters are an ingredient. You cannot sit down and drink a glass of bitters. Bitters are a heavily diluted alcohol infused with flavors from barks, spices, flowers, or fruits. They usually have a small amount of sweetener as well. Bitters were originally used as medicines.

There is nothing quite like bitters. These unique liquids are so full of flavor that you add only one or two dashes of them to your drink for added flavor.

Is There A Replacement For Bitters?

Replacing bitters depends entirely on what you hope to accomplish by adding them to a drink. Just as there are vastly different flavors of whiskeys, bitters vary depending on the botanicals they were infused with.

Bitters are used to help compliment and elevate the main alcohol. In the case of an Old Fashioned, warm fall spices like nutmeg and cinnamon play off the warmth of the whiskey.

There is also a dash of sweet that can be found in the drink. If you hope to replace the bitters in an Old Fashioned, you would need something that has warm flavors and a touch of sugar.

Many people use fruit as a way to get around bitters. Muddling fruit into cocktails creates fresh and delicious elements that can sometimes even be better than bottled bitters.

The other great thing about muddled fruit is that it does not contain any additional alcohol. Many bitters have relatively high alcohol contents that can affect the content of the entire drink when added.

If you are deciding whether or not to invest in a bottle of perhaps the most iconic bitters on the market, you should. Are Angostura Bitters necessary?

The answer is a very blurry no. While you can craft quality cocktails without it, you shouldn’t. Angostura Bitters are one of the most well known and well loved brands for a century. In the 1960’s and 1970’s there was a large shift away from classic cocktails and into the area of simple drinks like gin and tonic or rum and cokes. During this period, many bitters companies went out of business, losing any profit during the cultural shift.

However, Angostura Bitters survived and still remains today. Even in a sea of new and artisanal bitters popping up left and right thanks to the cultural resurgence of vintage cocktails, Angostura Bitters remains a fore runner and all time favorite for both bartenders and bar patrons alike.

Thanks to its classic flavor profile of warm spices and its roots to a time when cocktails were at their prime, many people find this bitter nostalgic. So while you can use other bitters or even get creative with fruit in cocktails, nothing beats the classic Angostura Bitters.

What Flavor Is Angostura Bitters?

Since their conception, Angostura Bitters have remained a staple in a bartender’s tool box. When it comes to crafting classic cocktails, nothing is quite as nostalgic as Angostura Bitters, but what do they taste like?

Known for its warm spices, Angostura Bitters taste of clove and hints of cinnamon. Unfortunately for bartenders and drink consumers, the exact recipe is well guarded and has remained a secret for generations.

The spicy flavor profile makes these bitters perfect for drinks that are made with rum or whiskey. However, Angostura Bitters have found their way into many drinks containing other types of alcohol.

When it comes to crafting high quality and full flavored cocktails, bartenders have been turning to bitters for centuries. This simple concoction of alcohol infused with large amounts of spices, flowers, barks, or fruits, allows a bartender to create entirely new flavor profiles with just a dash or two.

While bitters were originally designed to be medicine, they quickly made their way into the bar scene once people discovered how delicious they were. One of the most popular brands of bitters of all time is Angostura Bitters.

The well guarded recipe of  warm spices like nutmeg, clove, and cinnamon are what have made the iconic cocktails like Old Fashioned and Manhattans into legends that are still loved today.

Since its conception in 1824, Angostura Bitters has ruled the bitters world with its large, white, oversized label and full flavors. Today, there has been a resurgence into quality craft cocktails, and with that, an entire new generation of bitters.

Bitters are best viewed as an ingredient versus a spirit or a cordial. They cannot be consumed on their own and must be added to drinks very sparingly. Adding more than a dash or two to a drink can completely overpower it. Since they were once used as medicine, drinking too much bitters can make you sick.

If you want to experience bitters but are not fond of warm spices, you can find bitters in just about any flavor. Common flavors include celery, orange, cilantro, and even chocolate.

Due to the amount of bitters that is used in a cocktail, it is considered non-alcoholic. However, most bottles still contain anywhere from 35%-45% alcohol per volume. If you are creating a mock tail and want to avoid any alcohol at all, you can use muddled fruit as a stand in for bitters.

Using bitters as a bartender is similar to a chef using spices, adding a few dashes of it can change the entire flavor profile of the drink. Whether you want to stay classic with Angostura Bitters or try something completely new with a fruity or herb flavored bitter, the possibilities are endless.